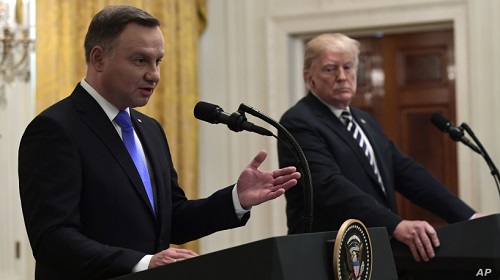 U.S. President Donald Trump and his Polish counterpart will make "a significant announcement on the future security partnership" Wednesday at the White House, according to senior administration officials.

"We believe it is going to significantly enhance our military-to-military relationship, but also enhance the defense and deterrence posture in Europe and our commitment to NATO," the officials said, speaking to reporters ahead of Trump's meeting with Polish President Andrzej Duda.

Another official, who spoke to VOA on condition of anonymity, said the agreement will involve hundreds of additional "rotational" U.S. forces.

No further details have been provided by U.S. sources, with some stressing that they did not want to get ahead of the announcement.

Polish Defense Minister Mariusz Blaszczak told Polish media last month that "there will be an increase in the presence of U.S. troops in Poland."

Warsaw has offered to contribute at least $2 billion to place permanent U.S. forces and assets in Poland in an attempt to deter any possible Russian aggression. NATO has expanded its presence near Russia's borders to reassure its eastern members, a buildup Russia has described as a threat to its security.

Military and diplomatic officials have been working for months on a deal in connection with Warsaw's offer to fund a permanent U.S. base.

Duda has suggested calling the facility "Fort Trump," in honor the U.S. president.

Acting Defense Secretary Pat Shanahan praised Poland in a meeting with his Polish counterpart, saying, "When you think about contributions in terms of NATO and burden-sharing, they're the model."

Poland is among the seven NATO countries that have already hit their goal of 2% GDP spending on defense, a pledge that Trump has often criticized other NATO allies for not yet achieving. The pledge, signed in Wales in 2014, requires all NATO countries to reach this goal by 2024.