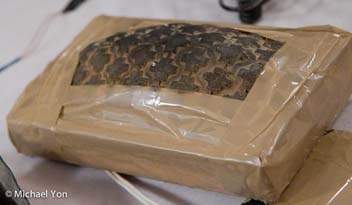 CIVCAS (civilian casualties) are a huge problem for our side and for the enemy. The enemy causes far more CIVCAS but as outsiders our mistakes have a more toxic psychological effect. We won't have to wait long for the next report of the Taliban accidentally, or purposefully, blowing up civilians. It will probably happen today and tomorrow.

Our movements along the roads are predictable. In many cases nothing that can be done about that. The times may vary, but many of the routes are set by terrain or circumstance. Our people are very well trained to spot the bombs, and they are supremely outfitted with an impressive array of countermeasures and armor. There are few if any complaints from troops about their training or gear to avoid being blown up. Nobody in history has been more prepared for IEDs than our current combat troops. It's hard to blow them up, but the enemy is smart and continues to land hard punches with low expense. Everyone realizes there is only so much you can do, and then you are in war, and you take chances.

The enemy has difficulty hitting our vehicles with RCIEDs (radio-controlled IEDs) because our countermeasures are excellent. Low-tech inexpensive methods, such as land mines, can work against us on roads, but the problem with land mines is that they are dumb and they blow up the first thing that ticks them off, which likely will be civilian traffic. Enemy CIVCAS toxifies their operating environment and also misses their target.

And so the enemy has developed techniques to circumvent countermeasures and reduce CIVCAS. One of those techniques is "the snapper."

Read more about the snapper at Michael Yon's online magazine.

And there it is, fellows.

I know, Bob. It has a lot to do with lethality self-limits. I'll let Mike finish it up and then do an analysis of IEDs for the readers at LoD, where he's co-publishing his pieces.

The "snapper" and the use of a triggerman has almost zero to do with avoiding CIVCAS and everything to do with not wasting the materials, time, effort, and opportunity that goes into building and emplacing an IED without being interdicted.

Yon makes interesting points, but our current state of affairs with regard to IEDs in OEF, has little to do with what he asserts.

The enemy avoid civilian casualties in several other ways, and not just a triggerman holding a wire and waiting for the target to approach.

The lack of a RCIED footprint is also less a function of them realizing that we have countermeasures that are hard to beat, and more due to the fact that the materials required to make RCIEDS are simply not plentiful in the country, and are likely a pain to import.