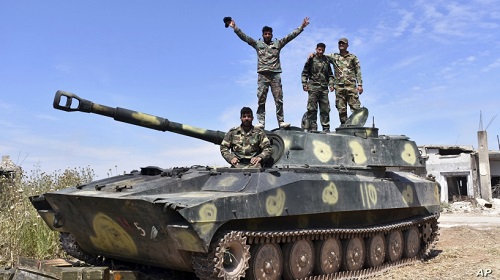 Syrian state media report that government forces now control all of the northern Hama province for the first time since 2012 and that they have encircled a Turkish military monitoring post in the town of Morek. Turkish President Erdogan says that he will discuss the issue with Russian President Vladimir Putin when they meet next week.

Supporters of the Syrian government in the country's fourth largest city of Hama shot fireworks into the air overnight, following news by state media that the Syrian military had captured all of northern Hama province for the first time since 2012. A Syrian Army spokesman announced the victory over state TV late Friday.

He said Syrian Army forces have pursued their advance in the north of Hama and the south of Idlib provinces, liquidating armed rebel groups after inflicting heavy casualties on them, and that army forces are intent on continuing operations to liberate all Syrian territory.

Turkish media reported that President Recep Tayyip Erdogan will protest the Syrian government advance to Russian President Vladimir Putin when he visits Moscow on Tuesday. Erdogan claims that Damascus has not respected the de-escalation agreement signed in the Russian resort town of Sochi, last year.

A Syrian state TV correspondent in northern Hama reported that the Syrian Army was demining areas it had recaptured from rebel groups and had re-opened a large stretch of the main highway linking Damascus to Aleppo, which it had recaptured.

One Syrian Army officer told Syrian state television the "most significant part of recapturing the area was the fact that it allowed many residents of these towns to be able to return home."

A woman resident of a town already under government control was also pleased by the victory:

She said the government victory means there no longer will be any warning sirens going off and that children can now play outside safely and be able to return to school.

Nadim Shehadi, executive director of the Lebanese American University Academic Center in New York, told VOA that he does not think the Syrian government military operation in northern Hama is a "significant victory." He also envisions a sort of stalemate settling over Syria, like the one that prevailed in Iraq between 1991 and 2003, with the country remaining under economic sanctions.

Syrian government analyst Mahmoud Maraie told state TV, however, that the advance of government forces in Hama was a "major victory," since it "allows the government to take control of the area for the first time since 2012, defeating several terrorist groups."

He also claimed that "Turkey did not abide by the Sochi agreement signed in 2018, forcing the Syrian government to find a military solution."

Damascus insists that Turkey had agreed to stop supporting what it considers terrorist groups in the Idlib and Hama provinces and to allow the re-opening of the strategic main highway linking Syria's two largest cities, Damascus and Aleppo.