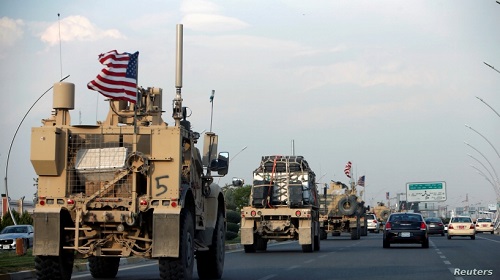 The officials, speaking on the condition of anonymity, warn Islamic State is well-versed in using regional conflicts to its advantage, having done so in Iraq in 2005-2006, and again in the aftermath of the Arab Spring.

And they note that IS has used the seven months since the fall in March of its last territorial stronghold in Baghuz, Syria, to lay a foundation of "dispersed networks" — comprising an estimated 10,000 to 15,000 fighters — for a prolonged and vicious insurgency.

"It is not clear at this time how ISIS may adjust their strategy in Syria in light of the Turkish incursion," a U.S. counterterrorism official told VOA, using an acronym for the terror group.

Until Turkey launched its operation in Syria's northeast earlier this month, most of IS's operations had targeted Kurdish security forces. There was also speculation that IS cells might try to free some of the approximately 12,000 fighters being held by the U.S.-backed Syrian Democratic Forces (SDF), as well as the tens of thousands of IS wives and other family members in displaced persons camps across the region — something IS leader Abu Bakr al-Baghdadi encouraged in a September speech.

Just how many captured IS fighters may have escaped or been freed remains uncertain. U.S. officials say both Turkey and the SDF have assured them the prisoners remain incarcerated, though they admit the absence of U.S. forces on the ground means the claims cannot be verified.

Both Turkey and the SDF have likewise accused each other of releasing IS prisoners to fight for them during the current hostilities — allegations each side rejects.

Conditions Ripe for Thriving IS

U.S. officials fear it is the type of atmosphere in which IS tends to thrive.

"Mistrust of the government, the inability of security guarantors to assure the safety of local populations, and divisions along ethnic and religious lines are all factors that ISIS has previously exploited," the U.S. counterterrorism official said.

And there have been indications, of late, that the terror group is growing bolder.

On Tuesday, the British-based Syrian Observatory for Human Rights quoted sources as saying that a former IS emir and 150 followers had moved back into the town of Tel Abyad, once a critical IS supply hub on the border between Turkey and Syria, and a focus of Turkey's recent operations.

The Manbij Military Council, a militia with ties to the SDF, also said Tuesday it had detected increased activity by IS cells in Syria, though it put some of the blame on Turkish-backed forces, accusing them of trying to help IS members escape.

So too, the Kurdish Red Crescent warned IS has used the conflict to "increase their capabilities again in the whole region."

"The Kurdish security forces has no capacity at all anymore to protect the civilians from the terror of ISIS," it said in a statement Tuesday.

And with fewer U.S. forces on the ground in Syria, current and former U.S. defense officials say the United States will have a harder time gathering intelligence on the terror group and monitoring IS activity.

So too, there are fears IS may use the chaos in northeast Syria to further fund its growing insurgency, by targeting oil fields now under the control of Kurdish forces — a fear that has resonated with U.S. President Donald Trump.

"We secured the oil," Trump said during a cabinet meeting Monday, saying the U.S. had a small force in the area.

U.S. Defense Secretary Mark Esper confirmed Tuesday that some troops "remain in the towns that are located near the oil fields," though he said he has yet to present the president with a long-term plan.

"A purpose of those forces, working with the SDF, is to deny access to those oil fields by ISIS and others who may benefit from revenues that could be earned," Esper told reporters Monday during a news conference in Afghanistan.

Yet, analysts and researchers caution while IS may have designs on the oil fields, many of which it once controlled, a straightforward takeover is unlikely.

"Controlling oil fields would be a boost, but would also expose it to direct attack," said Rand Senior Economist Howard Shatz, who co-authored a report on the terror group's finances.

Instead, Shatz suggested IS may look to another page of its revenue-boosting playbook —hijacking oil tankers, which could test the limits of a residual U.S. force.

"Today in Syria, if oil leaves the northeast oil fields by truck and there is limited coalition or SDF control of roads, ISIS could repeat this," he said.

Other analysts warn the bigger threat to the oil fields comes from Iran, Russia and Syrian President Bashar al-Assad, all of whom have long sought to take part in the profits, but which could enable IS in the process.

"The challenge here is that it is not possible to separate the counter-ISIS requirement from the broader issue of Assad and his backers," according to Jennifer Cafarella, research director at the Washington-based Institute for the Study of War (ISW).

"ISIS will be able to exploit the instability in eastern Syria that Assad and his backers would generate as they move in to seize oil fields and other infrastructure," she said, adding that neither the Syrian regime or Russian forces have shown the ability to prevent the terror group from reconstituting — a view long shared by U.S. military officials.

"This is visible in central Syria in the areas around Palmyra, where ISIS's insurgency is gaining momentum the fastest," Cafarella said.