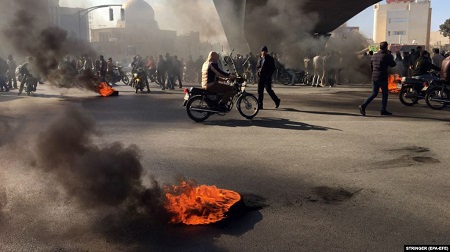 An Amnesty press release said it recorded fatalities of protesters in 21 towns and cities, with the highest numbers of deaths occurring in five western cities: Kermanshah, Javanroud, Bandar-e Mahshahr and its suburbs, Mariwan and Behbahan. 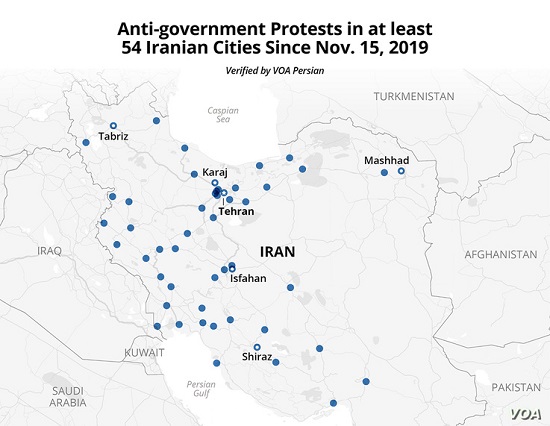 VOA Persian has independently confirmed the killings of at least seven protesters in shootings by Iranian security forces on Saturday.

Iranian state media have said several people were killed, including at least one security force member in the demonstrations that began Friday and spread to dozens of cities. But the Iranian government has not released any official numbers on deaths and injuries or arrests of protesters.

Iranian state TV broadcast images of pro-government rallies in several locations on Tuesday, in an effort to minimize the protests. Authorities also extended an almost complete shutdown of internet access into a fourth day to stop Iranians from sharing images of the protests with the outside world. The outage, which began late Saturday, made it difficult to determine the extent of Tuesday's protests.

The demonstrations erupted in response to the government abruptly raising the subsidized price of gas by 50% early Friday. Many Iranians see the increase as putting a further burden on their wallets at a time of worsening economic conditions.

“We have called on the regime to stop using force against its own people. We hope that more countries around the world demand the same thing,” Hook said in an interview at the State Department.

U.N. human rights agency (OHCHR) spokesman Rupert Colville told reporters in Geneva that his office is “especially alarmed that the use of live ammunition has allegedly caused a significant number of deaths across (Iran).”

Colville urged Iran to honor its commitments to respect the rights to freedoms of expression and peaceful assembly as a signatory to the International Covenant on Civil and Political Rights.

“We also call on the government to immediately reestablish Iranians' access to the internet, as well as other forms of communication which allow for freedom of expression and access to information,” he added.

Hook told VOA Persian that the Trump administration is “doing what we can” to enable the Iranian people to circumvent their government’s internet shutdown. He did not provide examples of U.S. government action, but he did appeal for one specific action to be taken by social media companies.

“We think that it is appropriate for any social media company to suspend the social media accounts of Khamenei, (Iranian President Hassan) Rouhani and (Foreign Minister Mohammad Javad) Zarif until they turn the internet back on,” Hook said. “This really speaks to the hypocrisy of the regime. They shut down the internet so the people can't use social media, and then the supreme leader and the president and the foreign minister use social media in order to tell their side of the story.”

In the quote, Khamenei appeared to refer to the protests of recent days and his crackdown on them as “security issues” involving the “enemy.” Khamenei has frequently blamed domestic unrest on foreign enemies such as the U.S. and its allies.

There was no immediate comment from U.S. social media giants Twitter or Facebook on Hook’s appeal for them to close the accounts of the three top Iranian officials. In the past, the companies have declined to respond to questions about the status of Iranian leaders’ accounts.