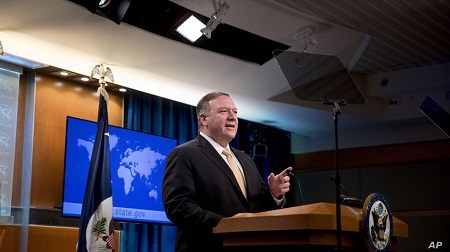 STATE DEPARTMENT - The United States and NATO are pledging unity in tackling challenges, including fighting terrorism, cyber threats and boosting energy security, seven decades after the establishment of the transatlantic partnership.

“Emerging security challenges and threats such as terrorism and energy security” will top the agenda when Pompeo holds talks with allies ahead of the December summit of NATO Leaders in London, according to the State Department.

“We are now living in a totally new time where we have terrorism. We have a shifting balance of power globally and we have cyber and many other things,” NATO Secretary-General Jens Stoltenberg told VOA's Serbian service last week in an interview.

All NATO allies are part of the Global Coalition to Defeat ISIS, focused on the Islamic State terror group that is also known as IS or Daesh.

The talks come days after Stoltenberg and more than 30 members of the U.S.-led coalition gathered in Washington to reaffirm what leaders say is a full commitment to ensure the enduring defeat of IS.

The coalition also repeated a push to all members for continuous humanitarian assistance in Syria.

Another expected topic at the meeting – China and its 5G technology.

“How does NATO deal with China?” asked Pompeo last week, during a speech at the Baker Institute in Houston. “NATO is confronted by Chinese efforts to undermine its security, its communications security. And so we’re mindful that the organization has to evolve.”

The United States has been pressuring allies to take a tougher stance on Beijing and its 5G technology, waging a wide-ranging campaign to block Huawei, a leading Chinese telecom equipment vendor and a key player in the 5G network, from global markets.

Washington is concerned that Beijing could use the network provided by Huawei to spy on communication traffic. Senior American officials have threatened to roll back intelligence sharing with allies that use Huawei’s equipment and technology.

While not specifically referencing U.S. warnings on Huawei, NATO Secretary-General Stoltenberg has said NATO will require members to protect civilian telecommunication systems, including 5G services, and ensure they “have reliable telecommunications systems in peacetime, crisis and conflict.”

Huawei CEO Ren Zhengfei has said his company will not share confidential user information, and denies the Chinese government controls the company.