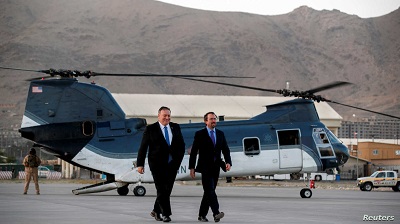 U.S. Secretary of State Mike Pompeo made an unannounced visit Monday to Kabul where he is expected to push both for advancing Afghan peace talks and for a resolution to a political crisis following the country’s presidential election.

Ghani was declared the official election winner, while Abdullah has challenged the result.  Each man held his own swearing-in ceremony.

Pompeo’s visit also comes a day after the United States and Qatar helped Afghan and Taliban officials hold their own talks through video conferencing.

Zalmay Khalilzad, the U.S. peace envoy for Afghanistan, said both the Afghan and Taliban sides “conveyed their strong commitment to a reduction of violence, intra-Afghan negotiations, and a comprehensive and permanent ceasefire,” while agreeing to hold more talks during the next two days.

The United States and Taliban reached their own peace deal that called for a reduction in U.S. forces in Afghanistan and for the Taliban to engage in peace talks with the Afghan government.