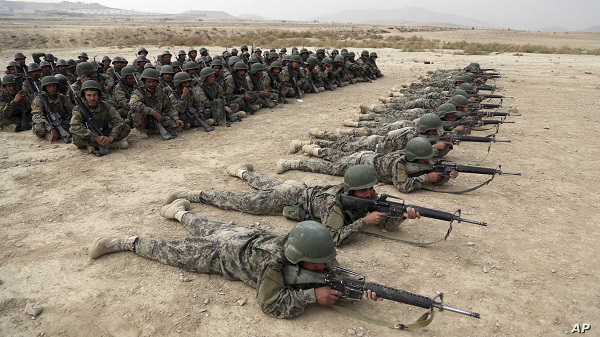 The U.S. Department of Defense has released the names of the two U.S. soldiers who were killed in a shootout early Sunday in the Sherzad district of eastern Nangarhar province in Afghanistan. They are Sgt. Javier Jaguar Gutierrez, 28; and Sgt. Antonio Rey Rodriguez, 28.

Six other servicemembers were wounded when an Afghan partner opened fire on the combined U.S. and Afghan force with a machine gun, a spokesman for the U.S. forces in the country said.

"We are still collecting information and the cause or motive behind the attack is unknown at this time," U.S. Colonel Sonny Leggett said early Sunday.

An Afghan defense ministry official, who was not identified because he was not authorized to speak to the media, said the shooter was an Afghan soldier who had argued with the U.S. forces before opening fire, the Associated Press reported. He was not a Taliban infiltrator, the official said.

Six U.S. service members have been killed in Afghanistan since the start of 2020, including Saturday’s casualties. Last year, 22 U.S. service personnel died in combat there.

The wounded American soldiers were said to be receiving medical treatment at a U.S. facility. The Afghan Defense Ministry said the shooting incident also killed one Afghan army solider.

The governor of the eastern Afghan province, Shah Mahmood Miakhel, told VOA the assailant in army uniform was also killed in the ensuing firefight. He said three personnel of Afghan special force and a number of U.S. soldiers were among those wounded in the incident.

Miakhel noted it was not immediately clear whether the deadly attack was an outcome of some misunderstanding or the shooter was an “influenced” person. He stopped short of suggesting the rogue soldier could be a Taliban infiltrator. The governor said an investigation into the incident was ongoing to ascertain details.

Nangarhar province borders Pakistan and a number of its districts serve as strongholds of Taliban insurgents or harbor bases for militants linked to Islamic State terrorist group.

There are roughly 13,000 American troops stationed in Afghanistan. Some of them are tasked with conducting counterterrorism operations, while the rest are part of a NATO-led Resolute Support mission of several thousand coalition forces, training and advising Afghan security forces battling the Taliban.

Incidents involving Afghan personnel turning their guns on local partners or U.S.-led international forces during training or combat operations are not uncommon.

The Taliban claims its fighters have infiltrated Afghan forces and carry out such insider attacks when they get an opportunity. But the insurgent group has not taken credit for Saturday night’s incident.

“We are long overdue to leave Afghanistan! After almost 2 decades, we need to declare victory and bring our troops home!”

The U.S. has been holding talks with the Taliban for months on a peace deal that, if signed, could lead to a gradual withdrawal of foreign forces from Afghanistan in return for insurgent security guarantees and commitments to engage in intra-Afghan peace negotiations to end hostilities in the country.