Parts In A Life

Parts In A Life 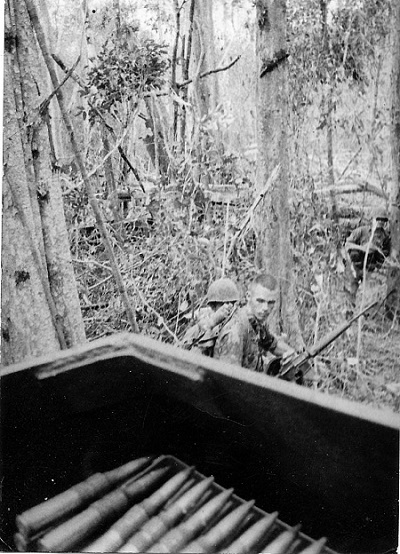 I found this foto today and it brought back a lot of memories as well as a reflection on life in general and how much life is just an agglomeration of luck and timing. Fortunate and unfortunate are mere millimeters of time and whimsical at best.

This was taken on 26 June 1967 in the aftermath of a battle at Suoi Long-described in my book- Living & Breathing. We are in the now exposed primary battle area-less than 100 meters wide and 200 meters deep. Once densely shrouded and internally visible for less than 20 meters in any direction, it is now grossly open and uprooted-the results of an hour of intense air strikes.

What is not apparent is the overwhelming cloud of aroma-the sharp smells of the results of organic combat. The soil renders a deep dank smell of injured trees, uprooted masses of dense foliage and the now heavy velvet blanket odors of decaying human flesh.

We are immersed in a deep melancolia to see what we had previously only marginally seen and been where we had previously struggled in close mortal combat. It was a deeply visceral emotion that could not be assuaged by endless cigarettes or mentholatum applied to the space between lip and nose.

Bodies and parts abounded-to be recovered and buried in the readily accessible cratars and trenches, now slowly filling with water. The Rangers, we recovered and evacuated in the back of the APC's present in the foto. The VC we rolled into the closest hole. The parts, simply slung like the detritus they were, over the accumulating bodies-over 400 from our count.

Throughout the battlefield, were arrayed the bodies of the combatants. Stacks of VC lay in every trench and the ground between trenches. Parts of people and equipment were scattered in the shattered stumps of trees and limbs as so many leaves. In many cases, it was extremely hard to differentiate between Rangers and VC due to the violence.

However, some things were very clear. The identifiable Rangers were all facing toward the basecamp-their direction of fire. Here and there, you could see clear signs where individual Rangers had tried to clear a low spot in the ground with their arms and legs from the low grazing fire. In daylight, the marks on the dirt were much like what kids make creating angels in the snow.

We began the task of separating and loading the Ranger dead for evacuation and massing the VC for on site burial. The VC were uniformly young and obviously fresh new replacements. They were probably between the ages of 16 and 18 and all had short cut hair and new equipment and black pajamas. I imagined this was their first combat.

The day was exceptionally hot, especially in the newly opened canopy direct sunlight. Soon we were visited by various Generals wanting to see the battlefield. The senior General of the day was the CG of the RVN Marines who was clearly moved and appreciative. He spent considerable time talking to Hiep and the Rangers and was profoundly effected by what he saw.

In the course of the day, I was shown a grouping of bodies. It was a Ranger medic bent over another Ranger. He had been shot in the head by a VC as he was tending his wounded buddy.

Many VC and Rangers were pulled off of each other attesting to the hand to hand combat. Where Second Company had made its assault, groups of both sides were intermingled in the center of the camp. I recall thinking how close we all were yet how little we were aware of events beyond the reach of our physical accessibility. In my memory, what was happening within yards of me went unnoticed.

Toward the end, one of the Rangers brought me to one of the last trenches in the position. In the bottom, lay what looked like a sleeping girl. It was a dead VC nurse with long hair draped across her cheek and covering her side almost to her waist. The soldiers, from the 48th Regt, were looking at her and talking. I got a body bag and placed her inside. Insofar as I know, she was the only VC we evacuated for burial. The rest and what parts we could not identify, we buried in the trenches.

I found this foto to be profoundly important to me, upon reflection. It shows me when I had learned, but not yet realized, a great deal about being a soldier, what that was all about and how important it is to learn something about humanity. Life is truly luck and timing and I am exceedingly grateful I am alive to see this foto and to have lived the life I have.