Online Book - The Russian Way of War: Force Structure, Tactics, and the Modernization of the Russian Ground Forces 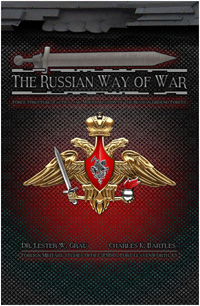 Russia’s annexation of the Crimean Peninsula, activity in Eastern Ukraine, saber rattling regarding the Baltics, deployment to Syria, and more assertive behavior along its borders have piqued interest in the Russian Armed Forces. This increased interest has caused much speculation about their current structure and capabilities, and future development. This speculation has created many different, and often contradictory, narratives about these issues.

At any given time, assessments of the Russian Armed Forces vary between the idea of an incompetent and corrupt conscript army manning decrepit Soviet equipment and relying solely on brute force, to the idea of an elite military filled with Special Operations Forces as represented by the “polite people” or “little green men” on the streets in Crimea. The Russian Way of War: Force Structure, Tactics, and the Modernization of the Russian Ground Forces sheds light on how the Russians describe their Ground Forces—what they consist of, how they are structured, how they fight, and how they are modernizing. Its authors, Dr. Les Grau and Mr. Charles Bartles, serve with the U.S. Army’s Foreign Military Studies Office (FMSO). Their study will be an invaluable, unclassified reference and guide for understanding for US Army analysts and leaders alike.

FMSO and its analysts are part of G-2, U.S. Army Training and Doctrine Command. For 30 years, FMSO has conducted open source research on foreign perspectives of defense and security issues with an emphasis on those topics that are understudied or unconsidered. Their analysts and expert contributors give military and security professionals an added dimension to their critical thinking about the operational environment.  The digital version of The Russian Way of War can be found at https://community.apan.org/wg/tradoc-g2/fmso/p/fmso-bookshelf .

The Russian Way of War: Force Structure, Tactics, and the Modernization of the Russian Ground Forces