Obama to Reverse Course on US Military Posture in Afghanistan

Obama to Reverse Course on US Military Posture in Afghanistan

U.S. President Barack Obama is expected to announce Thursday that he will slow down the planned withdrawal of American military forces from Afghanistan scheduled for next year.

An unnamed senior administration official said the president will maintain the current number of troops in the war-torn country at 9,800 through most of 2016, before trimming that number to 5,500 by the time he leaves office in January 2017.

Obama made the pledge last year to remove all U.S. forces from Afghanistan by the end of 2016, with the exception of a small contingent of 1,000 troops based at the U.S. embassy in Kabul. He said it was time for the U.S. to "turn the page" on a war launched in 2001 in response to the terrorist attacks on the United States. 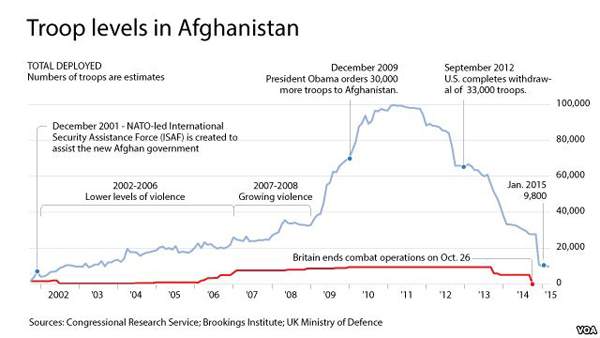 Officials said the revision comes after months of deliberations among the White House, military leaders at the Defense Department and commanders in the field, plus Afghan officials, and after Afghan forces briefly lost control of the northern city of Kunduz to Taliban militants.

The remaining 5,500 U.S. troops will be based in Kabul, Bagram, Jalalabad and Kandahar. The official says the forces "will continue to undertake only two narrow missions: counterterrorism and training, advising, and assisting our Afghan partners" in combating Taliban and al-Qaida forces.

In a statement issued Thursday calling for renewed peace talks, the Taliban insisted that the U.S.-led “occupation” of Afghanistan should end "in all its shapes, an Islamic government should be established" and there should be no foreign interference in internal Afghan affairs.

The insurgent group also criticized plans of the U.S. and its NATO partners to extend their Afghan military mission beyond 2016.

Russian news agency RIA quoted Russia's foreign ministry as saying it doubted the U.S. decision to maintain more troops in Afghanistan would ease the situation in that country.