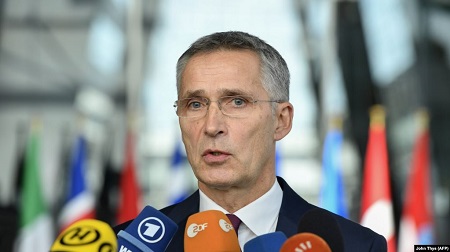 NATO has reaffirmed its commitment to the long-running Afghanistan mission and said it will ensure its deployment there remains "sustainable."

The promise came on October 25 at the end of a two-day meeting of NATO defense ministers in Brussels.

The second day of the meeting was largely focused on the 16,000-strong deployment in Afghanistan as it confronts an increased Taliban insurgency and uncertainty over U.S. strategy.

Stoltenberg added that, while the U.S.-led NATO deployment would be "constantly adjusted," its continued presence was needed "to send a message to the Taliban that they need to compromise" to reach a peace deal.

Alice Wells, the assistant secretary of state for South and Central Asia, said on October 24 after a visit to Kabul that all major candidates had vowed to accept the results.

"I stressed the need for a transparent and credible tallying process and for the ability of Afghanistan's electoral institutions to lead the process without pressure or interference," she told reporters after returning to Washington.

"At this stage, accuracy in tabulating the results is more important than speed, and I encouraged all candidates to exercise restraint and to await the official announcement of election results," she said.

Preliminary results from the presidential election were expected to be reported on October 19 but were delayed by Afghanistan's Independent Election Commission (IEC).

All of the previous elections in Afghanistan held since the Taliban government was forced out in 2001 have been marred by allegations of fraud, leading the IEC to use biometric devices for the first time.

The commission vowed to release the preliminary results as soon as possible but did not give a possible date.

The United Nations Assistance Mission in Afghanistan on October 15 said 85 people were killed and another 373 wounded in election violence during the period from June 8 to September 30.

On polling day alone, 28 civilians were killed and 249 injured. Children accounted for more than one-third of the victims.

Fifteen candidates were on the ballot, but the election was widely seen as a two-horse race between Ghani, seeking another five-year term, and Chief Executive Abdullah Abdullah.