Around 8PM twitterers and libre network users began reporting that shootouts were occurring in various sectors of the city in what media sources are calling a “narco rebellion”. In the aftermath Sergio Sisbeles, a spokesman for security affairs of Coahuila, stated there were 10 known casualties of the attacks with no apparent losses by the narco group, but possibly there may be civilian casualties.

Elements of GATE (special weapons and tactics group) and the narco group engaged in battle on Highway 75 and various parts of Piedras Negras. Using combat weapons and granadazos (grenades) the attacks lasted for hours.

Terror gripped the city causing widespread turmoil. The first confrontation broke out on Highway 57 at around 5 PM and the Micare plant and offices. The violence triggered American federal authorities to close the two international bridges in Eagle Pass, Texas.

A girls softball tournament was in progress while the violence was occurring, as the shootout ensued close to the playing field creating hysteria by the players and those attending the game, as they ran to safety.

Buses were stopped by the gunmen, passengers robbed and the buses set afire.

The armed gunmen are believed to be the Los Zetas cartel known to have control of Piedras Negras and are most likely responsible for the attacks.  The border with Mexico, Eagle Pass and Piedras Negras was closed to protect American citizens and prevent the violence from crossing over into the United States.

By using buses and a crane, it was the gunmen themselves that blocked highway 57, and the Acuna/Piedras highway, virtually isolating and paralyzing the city.  Bullet ridden vehicles were left inoperable by the gunmen shooting out the tires leaving hundreds of “ponchallantas” (punctured tires) scattered and blocking the main traffic arteries of the city.

A GATE officer was killed in the shootings, Maria Guadalupe Delgadillo, age 21, was dead at the scene however her fellow officer was alive but seriously wounded, he and the other wounded officers were taken to IMSS Clinic 11 for medical treatment, one in critical condition, four others serious condition and five in fair condition.

Army tanks remained at the hospital to protect the safety of the wounded officers. This action was taken hoping to prevent the gunmen from gaining entrance and killing the officers, as often occurs in Mexico to survivors of such attacks.

Recently, Piedras was one of the border cities receiving additional security as additional troops arrived such as the Marina and equipment including helicopters. On Monday of this week GATE troops arrived, and clearly preventing even greater loss of human life and property.

UPDATE:  Coahuila's Prosecutor's Office   announced the arrest of Eusebio Hernandez Olivas, alias “El Chebo” and Eduardo Hernández Reyes alias “El Guero”. These individuals were arrested in the vicinity of the road that leads from Piedras Negras to the ciudad Acuña and were arrested for involvement in the Piedras attack.  (see fotos below)  The state also emphasized that the GATE elements were deployed to Piedras this week to combat the alarming elevation of kidnapping and carjacking incidents in the city.

Among the items confiscated from the attack:

This photo is an untouched original. 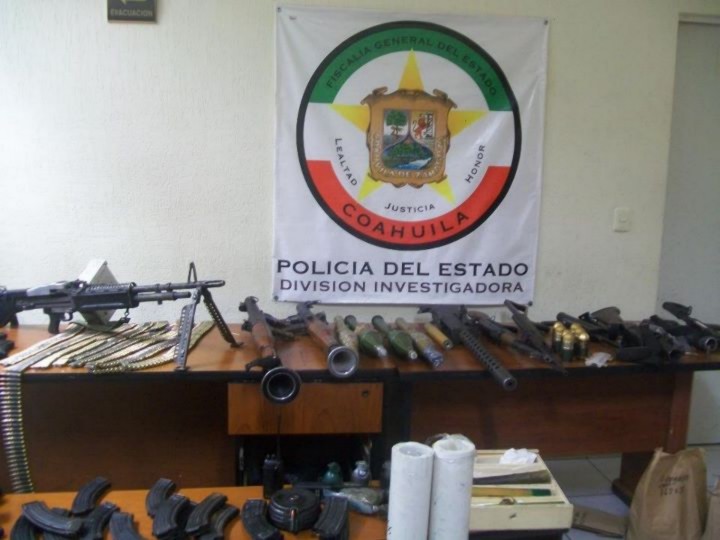 Who: Between Los Zetas (assumed) and GATE.

What: An engagement between criminal insurgents and Mexican state authorities that turned into running gun battles with infantry small arms (assault rifles, light machine guns, thrown/launched grenades, and rocket propelled grenades). Vehicles (with tires shot out) and buses (set on fire) were utilized by Zeta tactical units to channel opposing forces (to create kill zones) and to block main avenues of approach/hinder the mobility of responding GATE/law enforcement elements. Note—The reporting of army tanks protecting the hospital is in error; rather armored cars (non-tracked vehicles) were deployed. Ten allied Mexican state casualties were noted from this engagement.

Where: On Highway 75 and in various parts of Piedras Negras, Coahuila (Across from Eagle Pass, Texas).

Why: The Mexican government is deploying additional forces to Piedras Negras in order to retake de facto political control of the city from Los Zetas.

Outside Expert Analysis: Sid Heal, a retired SWAT Captain (later Commander) with the Los Angeles Sheriff’s Department and retired CWO5 with the U.S. Marines, was asked to evaluate the level of this engagement. According to Commander Heal “Clearly, the confrontations between the authorities and criminals have escalated to war in all but name only.” After some reflection, he further went on to state:

One thing that occurred to me in retrospect is the long understood principle that the weaker adversary always seeks refuge.  The nearest and safest refuge is a short distance to the north. Inevitably then, some of these violent episodes will follow and I believe we are starting to see that very thing.  Moreover, there are historical precedents, not the least of which are the execution of 18 Americans by Pancho Villa in 1916 which resulted in the incursion by Gen. Pershing.  Accordingly, if the Mexican government is unable to protect their own citizenry it is at least not incredible that they would seek refuge because it would provide both a temporary sanctuary and potential punitive actions against the assailants by a stronger government.

Commander Heal’s concerns are being echoed by many law enforcement officers along the U.S. Border. Increasingly, we are witnessing the emergence of zones of “dual-sovereignty” being established by the cartels on U.S. soil. The potential for the loss of

de facto political control in rural areas of Southern Texas across from Piedras Negras and other borderland towns controlled by the Mexican cartels is becoming a U.S. national security concern.

Photographic Analysis: The following two photographs originally posted by GATE have had numbers added to them in order to label and identify the various weapons and hardware recovered. A third photograph of weapons on the table has then been enhanced and has had numbers added. It should be noted that the cartels are increasingly being armed with military grade weaponry—the same weaponry that would be provided to squad and platoon sized military units of insurgent forces and national armies. 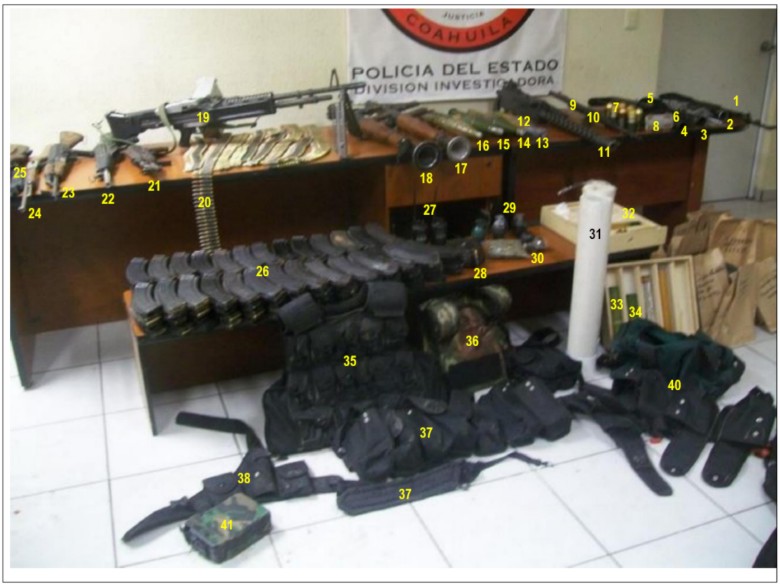 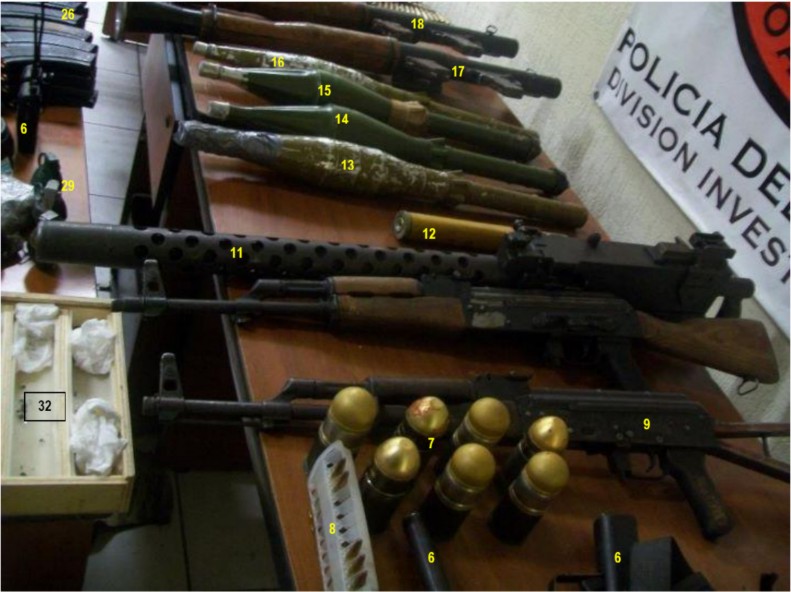 HK69A1 40mm Grenade launcher (“Granatpistole”) [Item No. 6; is a very high quality 40mm launcher that is produced in Germany and is in service with a number of military and police forces, all of which are overseas.  There is a high likelihood that this weapon was hijacked or interdicted during a shipment of legitimate arms, possibly destined for delivery to the Mexican government.  Another probable example of a hijacked weapon in this group would be Item No. 19, the M-60 Machine gun of U.S. mfg.

RPG-7 Presence:  The presence of two RPG-7s’ (Item Nos. 17 & 18) in this cache may have significance based upon their origin.  Components of the Mexican army appear to have fielded small numbers of RPG-7s within the past several years from sources currently unknown.  The RPG-7 has seen very limited use on the southern continent, with the exception of the El Salvador conflict that occurred in Central America in the mid 1980’s.  While the dates of manufacture of these weapons are not readily apparent, they appear far too new to be from the El Salvador conflict.  They do however, appear, to be of European (RFAS or former Eastern Bloc) or Middle Eastern origin.