This is an addendum on the potential source of MG-34 GPMGs seized by the Mexican Government at Ixtlan del Rio, Nayarit, as originally discussed in Mexican Cartel Tactical Note #11.

Note: The presence of MG-34 General Purpose Machine Guns in Mexico can be traced back to the 1954 Guatemalan Civil War and illuminates often-ignored arms smuggling routes into southern Mexico.

Another MG-34 (initially misidentified as a “Barrett”) was part of what was described as the largest weapons seizure in the history of Chiapas, and the biggest weapons seizure in the entire country to that date in 2009. While the Mexican government claimed that the cache belonged to Chiapan peasant leader Jose Manuel “Don Chema” Hernandez Martinez, substantial circumstantial evidence actually pointed to the Zeta cartel ownership. Martinez was arrested on September 30th and subsequently released on November 24th, 2009.

What: Weapons cache seizure by the Mexican Government.

Why: Conflicting arrest accounts of three men later linked to the Zeta cartel 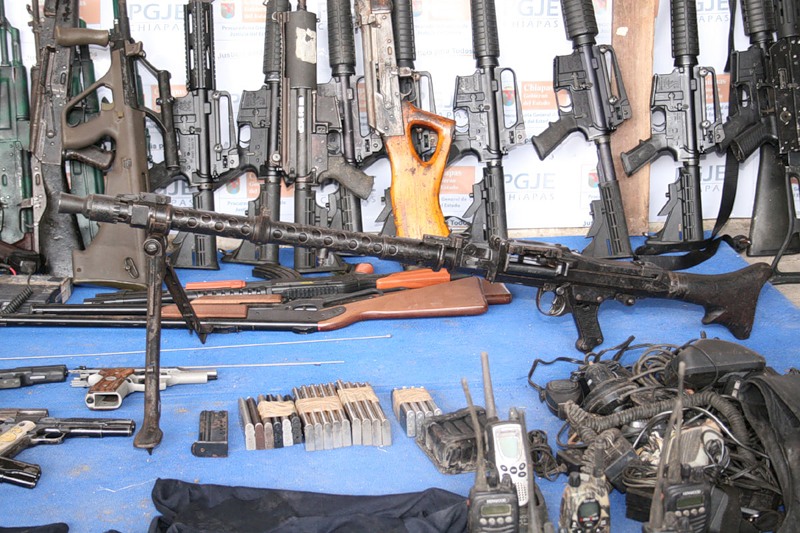 Note: The most likely source for the 7.92mm MG 34 General Purpose Machine Guns seized in October 2009 and January 2012 was a 1954 Czechoslovakian shipment to Guatemala. At that time, Guatemalan President Jacobo Arbenz Guzmán circumvented an arms embargo by arranging for two thousand tons of weaponry to be smuggled into his country via the Swedish motor vessel Alfhem.

While the vast majority was detritus from Czech arsenals, part of the Alfhem’s cargo included 7.92mm MG-34 GPMGs (along with 9mm MP-40 submachine guns, 7.92mm K98 and G43 rifles) which were delivered to the Guatemalan Army’s 1st and 2nd Regiments. A period post-coup newsreel about Carlos Castillo Armas clearly shows several of these weapons on display at the 1.09 mark.

Exactly how and when these weapons could have crossed into Mexico over the next 55 years remains a mystery, but corruption has been singled out as the main problem affecting Mexico’s southern border management and the Customs Service.

While most of the media’s attention still focuses on Mexico’s northern border, Guatemala remains a major source country for cartel weaponry (both Central American Cold War left-overs and new arms trafficked into Guatemala from the U.S.).

Ironically, former CIA employee Samuel Cummings’ INTERARMCO was the first arms dealer to set up shop in Guatemala, re-equipping the 5,000-strong army in 1954 with American WWII weaponry surplused from Britain.

Jorge Kawas, “Guatemala and the Black Market for US Weapons”, Insight Magazine, November 25, 2011

David M. Barrett, “Congress, the CIA, and Guatemala, 1954”, Center for the Study of Intelligence

"Assault rifles AK-47, M-16, grenades, grenade launchers, among other items, are part of the arsenal seized in Guatemala to members of drug trafficking groups".

What do you suggest we do?

We're going to have to take stronger action in this civil war or our border region will become destabalized.

Please Bill, don't use computer geek counting where 1 is 2 and 0 is 1. That used to drive me completely crazy. If this is the the first case, it is case 1.

"Authorities are investigating whether the bodies found are linked to violence by Mexican drug cartels. The incident took place in the Vekol Valley, a hotbed of drug- and human-smuggling activity, according to Babeu, who said his department conducted 350 high-speed chases in the area last year in an effort to curb such crime.

"It looks like it's a cartel hit, where they exact revenge on people," the sheriff said, calling a drug connection "very likely" while noting there's been no definitive conclusion yet. "It happens all the time in Mexico; our fear and concern is that this violence is spilling over deep into the heart of Arizona.""

This case should be watched, it may turn out be case 0 for this level of violence conducted in the U.S. by the cartels.