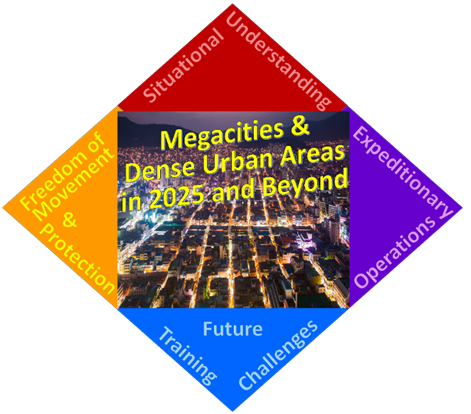 Mad Scientist, organized by the Army’s Training and Doctrine Command (TRADOC) G-2 (Intelligence), provides a continuous dialogue with academia, industry, and government on the concepts and capabilities needed for the future operational environment (OE).  Mad Scientist also facilitates dialogue in order to define the future OE through 2050.  Mad Scientist supports the examination of the future OE through exploring innovative ways to improve the effectiveness of the future force to ensure it can accomplish a diverse set of missions throughout the full range of military operations.

Insights from these events are used to provide input into concepts and capabilities documents, including the Commanding General’s annual requirement to recommend science and technology investment priorities to the Army Staff and the Assistant Secretary of the Army for Acquisition, Logistics, and Technology (ASA/ALT).  They also provide technology based assessments to support Army Capability Development activities and provide input to the Army’s Centers of Excellence (CoE) concept and capability development.

The Army has studied megacities and dense urban areas for a considerable amount of time.  Building upon previous work, to include a 2015 report completed by the Chief of Staff of the Army (CSA) Strategic Studies Group on megacities, TRADOC G-2 partnered with ASURE and ICoE to conduct a Mad Scientist conference (21-22 April 2016, with a focus on “Megacities and Dense Urban Areas in 2025 and Beyond”).  This event was critical in supporting megacity and dense urban areas concept and capability development.  The conference was used as a venue to validate assumptions or propose concepts to interested academic, material developer, and Joint communities. Speakers at this event included senior military leadership, ASU professors, engineers, and other world renowned experts. In order to ensure that the presenters were subject matter experts in their respective fields of study, a call for papers was conducted during the selection process.

The event was organized to study four overarching problem sets that future land forces are likely to encounter while operating in megacities or dense urban areas. These problem sets additionally served as the conference’s objectives: 1) gain situational understanding, 2) enable future force freedom of movement and access, 3) conduct expeditionary operations, 4) and mitigate future training challenges. These problems sets, formulated as conference objectives, were used as a basis to explore concepts and capabilities to match the complexities of these environments.[1]

The four problems sets were associated questions to serve as essential elements of analysis:

(2) Freedom of movement and protection:  What emerging concepts and capabilities will enable access and freedom of movement in, above (buildings and airspace), below (sub-terrain), and around megacities? What new capabilities for Decentralized Urban Logistics can improve sustainment efficacy in urban areas? What will protect vehicles and Soldiers, while enabling freedom of movement, from multitude of advanced and conventional military technologies as well as environmental threats (e.g., water, sanitation, air pollution; etc.)?

(3) Expeditionary operations:  What emerging concepts and capabilities will enable expeditionary maneuver; evolve Army Health Support of Operations; enhance the ability to manage or influence large population centers, and offer solutions for achieving partner interests and strategic objectives throughout a range of military operations (during peace and combat operations)?

(4) Future training challenges:  What emerging technologies and capabilities must the Army explore and adopt in order to realistically represent the complexities of a megacity to a training audience (home station and Combat Training Centers) allowing the development of cohesive teams that thrive in ambiguity, austerity, or chaos within OE of 2025 and Beyond.