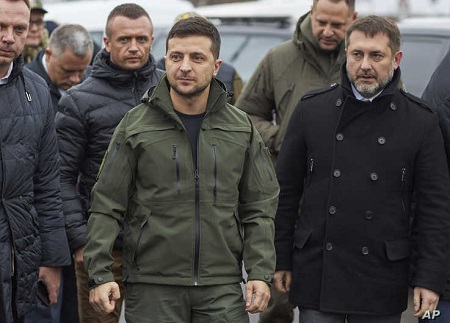 MOSCOW - The leaders of Russia and Ukraine hold their first face-to-face talks in Paris next week as part of a European summit aimed at ending the five-year war between Ukrainian government forces and pro-Russian rebels in east Ukraine.

In advance of the latest attempt to end the bloodshed in Ukraine’s Donbas region, observers caution that entrenched differences mean Russia and Ukraine may work toward more trust-building measures, rather than aim for a grand bargain.

For more than five years, Ukrainian government forces and pro-Russian separatists have been locked in a grinding war in eastern Ukraine’s Donbas region that has killed more than 13,000. Over that period, the Kremlin has maintained, against all evidence, it is not part of a war in which Russian soldiers, rebranded as “volunteers,” have joined in the fighting on the side of the rebels.

European powers, too, have repeatedly tried, and failed, to negotiate an end to the violence.

Against that backdrop, enters a newcomer, Ukrainian President Volodymyr Zelenskiy.  A comedic actor made famous for a role playing an accidental Ukrainian president on TV,  Zelenskiy won the real thing in a landslide election victory earlier this year. His central promise to voters was to end the war in east Ukraine.

“He promised peace. That was one of the most important points of his election campaign and he tries to deliver,” says Andrey Kortunov of the Russian International Affairs Council in an interview with VOA. "So we see a new flexibility on the Ukrainian side which allowed them to reach a couple of agreements on specific issues.”

Successes include a mass prisoner exchange negotiated between Russia and Ukraine in September.

Then, last month, Russia returned three Ukrainian naval ships it had seized a year before,  a gesture that turned sour after Kyiv accused Moscow of stripping the vessels into disrepair.

Zelenskiy’s past television performances, often conducted in the native Russian he grew up speaking, help him jump one of the cultural pitfalls of the Ukraine conflict, says Boris Kagarlitsky, a professor of sociology at the Moscow School of Social and Economic Sciences, who has studied political movements in Ukraine and Russia.

“There are millions of people in Russia who saw these performances and movies, who laughed at his jokes. He’s funny,” says Kagarlitsky in an interview with VOA in Moscow.

“And an enemy should be scary. Zelenskiy’s not,” he adds.

The laughs don’t extend to Donbas — with Ukraine still looking to regain control over territory lost to pro-Russian rebels.

Russia, in turn, is insisting on special status for, and perhaps influence over, self-styled “independent republics” in Donetsk and Luhansk.

Though not recognized by Moscow formally, the east Ukrainian separatist movements provide the Kremlin with a tool to sabotage Ukraine’s stated ambitions to join western institutions, such as the European Union and NATO.

Meanwhile, foreign policy experts argue the addition of France and Germany to the talks — part of the so-called Normandy Format quartet of nations addressing the Ukraine crisis  — can do little to mask fundamental differences between Moscow and Kyiv over the future of the Donbas.

“On the whole Russia and Ukraine are headed to the Paris summit with such radically different positions over the key aspects of the peace deal, that expecting any serious progress in the Normandy Format is not to be expected,” wrote analyst Vladimir Frolov in the Russian online magazine, Republic.

“The problem is that each side is certain that the strategic concession should be done by the other,” added Frolov.
Meanwhile, Zelenskiy faces other political challenges:

His efforts to make peace with Moscow have alienated nationalist forces at home. Recent polls show a 20-point drop in his ratings, which is inevitable, Zelenskiy’s supporters say, for impossibly inflated hopes.

Another factor is European pressure on Ukraine to accept the terms of earlier failed peace efforts — negotiated between France, Germany and Russia under Zelenskiy’s predecessor Petro Poroshenko — as simply the best deal Ukraine can get against its more powerful Russian neighbor.

Among agreed measures, the so-called Minsk II Protocols allow Russia to decide whether Ukraine had made adequate constitutional concessions to the Donbas separatist regions before handing back control of Ukraine’s eastern border.

The Paris talks’ host, French President Emanuel Macron, in particular, has signaled a recent readiness to mend relations with Moscow despite hybrid military campaigns that saw Russian “volunteer” soldiers stream into east Ukraine to join in the fighting. There’s also the lingering question of Moscow’s direct annexation of Crimea from its neighbor in 2014.

Finally, there is Ukraine’s cameo role in the impeachment hearings in Washington — a focus that has put Trump administration’s support for Ukraine into question just when Zelenskiy needs it most.

Given the complexities, both sides are playing down expectations for now, while hinting at other trust-building agreements.

Possible Plan B deliverables would include a second prisoner exchange or a deal to deliver Russian oil and gas through Ukraine to Europe.

Either would prove a smaller but important step toward rebuilding a modicum of trust.

They're also a tacit acknowledgement: Ukraine and Russia remain locked as neighbors, whether they like it or not.