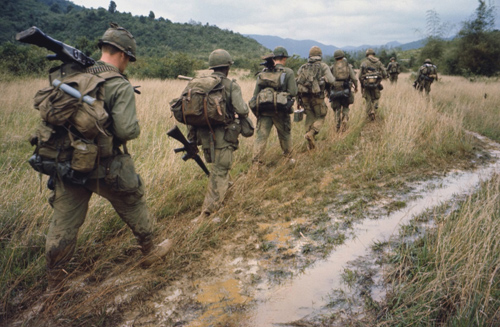 The story of the Vietnam War is a story about the present as well as the past, says Ken Burns, whose documentary on the conflict, co-directed with Lynn Novick, premieres Sunday on PBS.

Much of today’s deep political divide can be traced to fissures that emerged during the war, he says, and the documentary “unpacks” that era to help viewers understand “an incredibly important moment in American history.”

More than 80 people were interviewed for “The Vietnam War,” including veterans, anti-war protesters and Vietnamese on both sides of the conflict. The narrator is actor Peter Coyote.

The new film is Burns’ third exploration of the nation at war, which began with “The Civil War,” one of the most acclaimed historical documentaries, followed by “The War” (World War II).

Burns, born in New York in 1953, graduated from Hampshire College in Massachusetts in 1975 and formed documentary production company Florentine Films with college classmates the next year. Their first documentary was “Brooklyn Bridge,” a 1981 film for PBS.

Novick, born in London in 1962 and raised in New York, graduated from Yale University in 1983 and joined Florentine Films in 1989 as an associate producer on “The Civil War.” She was co-director of “The War.”

Burns and Novick discussed their film with Chuck Springston, editor of Vietnam magazine; this interview appears in that publication’s October issue, and was originally published online by Military Times’ sister publication group, HistoryNet…