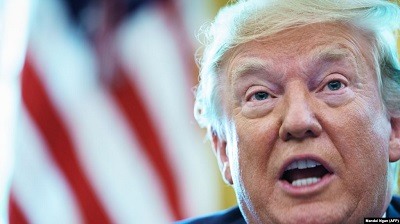 Iran and the United States have traded insults, with Tehran accusing Washington of "lying" about its willingness to hold talks to steer the two nations away from military conflict, a statement President Donald Trump called “very ignorant and insulting.”Speaking on June 25, a day after Trump signed an order imposing "hard-hitting" sanctions on Iran, President Hassan Rohani dismissed the move against the country’s top leaders, including Supreme Leader Ali Khamenei, as "idiotic.""This White House is mentally disabled and doesn't know what to do," Rohani said.The new sanctions will deny Iran's leader and those close to him of "access to key financial resources and support," Trump said as he signed the document in the Oval Office on June 24, adding it was punishment for the Islamic republic's "provocative" actions in recent weeks."How come they are talking of negotiation while at the same time seeking to sanction Iran's foreign minister," Rohani was quoted as saying by Iranian news agencies.

Trump took to Twitter to respond to the Iranian leadership, saying it “doesn’t understand the words ‘nice’ or ‘compassion’" and that the "Iranian people are suffering."“Iran’s very ignorant and insulting statement, put out today, only shows that they do not understand reality. Any attack by Iran on anything American will be met with great and overwhelming force. In some areas, overwhelming will mean obliteration,” Trump warned.

U.S. Treasury Secretary Steven Mnuchin said after Trump's announcement on June 24 that the president had authorized him to impose sanctions on Iranian Foreign Minister Mohammad Javad Zarif this week, a move some said would be a sign that the U.S. administration is not interested in de-escalation.

“This is a clear attempt to stop any attempt at diplomacy,” Carl Bildt, Sweden's former foreign minister, tweeted after Mnuchin’s comment.

"I think this is unprecedented in the global annals of diplomacy and foreign affairs," he added.

Trump also said he will "continue to increase pressure" on Iran until the regime ends its “dangerous activities and its aspirations,” including its pursuit of nuclear weapons, development of ballistic missiles, and support of terrorism.

Zarif accused the White House of having a "thirst for war," while Majid Takht Ravanchi, Iran's ambassador to the United Nations, said his country will not hold talks with the United States under threat of sanctions, which he described as "warfare" against his people.

Foreign Ministry spokesman Abbas Musavi tweeted that the "useless" U.S. sanctions against Khamenei and Zarif meant the "permanent closure of the path of diplomacy."

Tensions between Tehran and Washington have spiked since an Iranian missile destroyed a U.S. Global Hawk surveillance drone on June 20.

Trump said on June 21 that he came within minutes of executing strikes against Iran in retaliation for the downing of the drone which the United States says was in international waters when Iran knocked it out of the sky with a surface to air missile. Iran has insisted the aircraft was flying over its territory.

Russia, an ally of Iran, defended Tehran's claim on the location of the drone when it was shot down.

"I have information from Russia's Defense Ministry that this drone was located within the airspace of Iran," the chief of Russia's Security Council, Nikolai Patrushev, said in comments carried by Russian state news agency TASS. He did not show any hard evidence to back up his claim.

Russian Foreign Minister Sergei Lavrov warned on June 25 that the situation concerning Iran was developing toward a dangerous scenario, the RIA news agency reported, while China urged "calm and restraint" amid the rising tensions.

"We believe that blindly applying maximum pressure will not help solve the problem," a Foreign Ministry spokesman said at a press briefing in Beijing.

This followed two attacks earlier this month on oil tankers in the Gulf of Omen. The United States blamed Iran, which denied it was behind the sabotage.

U.S. Secretary of State Mike Pompeo met June 24 with leaders in Saudi Arabia and the United Arab Emirates as he seeks to build a "global coalition" on Tehran.

Trump said the United States doesn’t “ask for conflict” with Iran and hoped to reach an agreement with Tehran soon.

“We would love to be able to negotiate a deal if they want to,” he said.

The sanctions freeze all their property in the United States and effectively prevent any individual or entity from doing any financial transactions with them.

The new sanctions will lock up billions of dollars in Iranian assets, Mnuchin said.

Trump made taking a tough stance toward Iran and its nuclear program a key element of his 2016 campaign and has followed through on that promise since coming to power.

Last year, he withdrew the United States from the 2015 Iran nuclear deal that sought to curb the country’s nuclear program in exchange for an easing of sanctions.

Trump called the agreement “short-sighted” and claimed that under its terms Iran would have been able to develop nuclear weapons in a few years.

The president has imposed sanctions on more than 900 Iranian individuals and companies since 2018, squeezing the oil-producing nation financially.

As a result, Iran’s economic growth contracted 4 percent in 2018 and is forecast to tumble 6 percent this year, according to the International Monetary Fund. The nation’s currency has plummeted and there are reports of shortages of food and medicine.

The UN Security Council met behind closed doors on June 24 at the request of the United States, whose acting Ambassador Jonathan Cohen said that Trump's policy is aimed at bringing Iran back to the negotiating table.

However, Richard Haass, president of the Council on Foreign Relations, said the mounting sanctions may have the opposite effect.

“The logic of his policy of [economic] pressure is that sooner or later Iran will push back and do something that compels us to attack. War will only be avoided if Trump offers Iran a legitimate diplomatic off-ramp,” he said in a tweet before the new sanctions were officially announced.