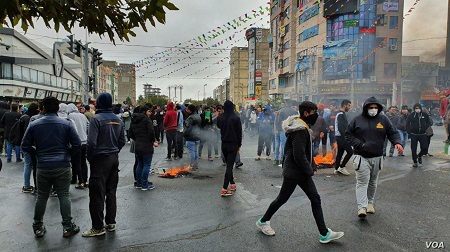 Authorities in Iran have blocked internet service for a third day as part of a crackdown on nationwide anti-government protests in which at least eight people have been killed since the unrest began Friday.

In a Monday interview with VOA Persian, the director of the London-based internet observatory NetBlocks said web access in the Islamic Republic remained severely disrupted after Iran blocked it late Saturday local time.

"This is essentially a near-total blackout," Alp Toker said. "There are a few (internet) routes out (of the country), but these are very technical right now, so it's not practical to circumvent these measures for most people." Toker said some technically savvy Iranians might be able to get web access using a fixed line or broadband connection rather than a mobile device.

The internet outage has made it difficult for Iranians to share protest images and information with each other and the outside world. The demonstrations erupted in response to the government abruptly raising the subsidized price of gas by 50% early Friday.

The government said revenue from the higher prices would be used to provide cash handouts to poor families.

While Iran's new gas price of 13 cents a liter remains among the cheapest in the world, many Iranians see it as putting a further burden on their wallets at a time of worsening economic conditions.

Iran's currency has slumped, with unemployment and inflation surging since the United States began tightening sanctions against it last year in a bid to force Tehran to stop perceived malign behaviors.

Toker said any short-term advantage that Iran's government might gain from blocking the internet would be outweighed by the costs.

"The internet is an outlet for people to democratically express their views, and if they can't do this, there's actually a risk that these protests could become more violent," Toker said.

"We also see economic harms, with tens of millions of dollars of losses to Iran's developed information and communications technology (ICT) industry. People are going to start losing their businesses because they rely on connectivity."

Images verified by VOA Persian and sent from Iran showed the bodies of at least seven protesters killed by security forces who opened fire on demonstrations in seven cities on Saturday. The bodies were seen in footage from the cities of Behbahan, Karaj, Marivan, Shahriar, Shiraz, Sirjan and Tehran's Baharestan district.

VOA Persian was not able to confirm the names of the protesters who were killed.

U.S. Secretary of State Mike Pompeo, speaking to reporters at the State Department on Monday, said Washington “strongly condemns any acts of violence by this regime against the Iranian people and (is) deeply concerned by reports of several fatalities.”

Pompeo also called on Tehran to “immediately restore the ability of all Iranians to access a free and open Internet.”

Iranian state media said at least one member of the security forces also was killed in protests since Friday. They said hundreds of people were arrested, some armed, for engaging in violent acts such as attacking banks and looting stores.

Iranian foreign ministry spokesman Abbas Mousavi rejected Pompeo’s remarks, saying the U.S. top diplomat in “no position to sympathize” with the Iranian people as they are suffering from what Mousavi called “U.S. economic terrorism,” a reference to U.S. sanctions.

Many of the anti-government protests that VOA Persian has confirmed in more than 50 towns and cities across the country have been peaceful.

One video clip verified by VOA Persian showed demonstrators blocking a street in the central city of Shiraz on Sunday and chanting "death to the dictator," a reference to Iranian Supreme Leader Ayatollah Ali Khamenei. It has been a common chant of protesters since Iranians angered with government corruption and mismanagement last took to the streets around the country in December 2017.

Another video clip from Sunday showed chanting protesters at Tehran University, where they said Iran had "lost" its oil wealth by squandering it on Islamist militias engaged in regional conflicts.

In remarks to the international media on Monday, government spokesman Ali Rabiei said the situation in the country was "80% calmer" than Sunday. "Only some minor problems remain, and by tomorrow and the day after, there will remain no riots," he predicted.

Iran's ongoing internet outage made it difficult for VOA Persian to verify whether any protests had occurred on Monday.

In a threatening message published by state media, Iran's most powerful military branch, the Islamic Revolutionary Guard Corps, said it will take "decisive" action against any continued efforts to disturb peace and security.

IRGC forces and their affiliated Basij militia violently suppressed the nationwide anti-government protests that began in late December 2017 and stretched into January 2018. At least 22 people were killed.

Ayatollah Khamenei, in remarks by published by state media on Sunday, denounced protesters who he said were disrupting law and order in recent days as “thugs.”

He also expressed qualified support for the decision by the government of President Hassan Rouhani to raise the gas price.

“I am no expert in managing fuel consumption and expert opinions are different,” Khamenei said, according to state news agency IRNA. But he added the gas price increase “must be implemented” as it was an “expert decision” aimed at reducing Iran’s high rate of gasoline consumption.

“Khamenei is giving himself space to put the blame on the Rouhani government in case things go haywire,” said Jason Brodsky, policy director of U.S. advocacy group United Against Nuclear Iran, in a VOA Persian interview.

“Right now, we see protests in the streets and things are going not in the regime’s favor,” Brodsky said. “So I think Khamenei is doing the same thing that he’s always done, and that is, to condition and hedge his support for government decisions in order to protect himself and his office at the end of the day.”