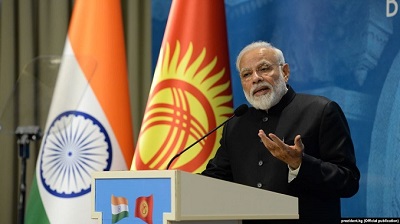 Indian Prime Minister Narendra Modi has said that revoking Indian-administered Kashmir of its special status will restore the region to its "past glory" and play an "important role" in the country's development.

Curfew-like restrictions and a near-complete communications blackout have been in place in Indian-ruled Kashmir since August 4, just before New Delhi revoked an article in its constitution that guaranteed the predominantly Muslim region greater autonomy than other states in India.

Pakistan, which has denounced India's move as illegal under international law, is observing a so-called Black Day to coincide with India's Independence Day celebrations, with more demonstrations planned across the country and the Pakistani part of Kashmir.

Newspapers in the country printed editions with black borders, hashtags like #15AugustBlackDay were trending on Twitter, and politicians, including Prime Minister Imran Khan, replaced their social-media pictures with plain black images.

Kashmir is divided between Pakistan and India, but it is claimed in full by both countries. The two nuclear-armed powers have fought two wars over the region since partition in 1947.

In his speech, Modi said that Article 370, the constitutional provision that granted Indian-ruled Kashmir special status, fueled a movement for separatism and led to "corruption and nepotism, as well as injustice" for women, children, and tribal communities.

"We will restore Kashmir's past glory and it will play an important role in the nation's development," the Indian prime minister said.

"I will be the ambassador who raises Kashmir's voice around the world," Khan said.

He also accused India of planning military action in Pakistani-administered Kashmir, and promised to "fight until the end" against any Indian aggression.

Pakistan has responded to India's moves in Kashmir by suspending bilateral trade and all public transport links with its neighbor, as well as expelling New Delhi's ambassador to Islamabad.

Meanwhile, India's Hindu-nationalist-led government said that restrictions had been eased in the Hindu-majority Jammu region, but remain in place in the mainly Muslim Kashmir Valley, the main hotbed of a three-decades-old insurgency against Indian rule that has killed tens of thousands of people.

Despite the security clampdown, there have been protests against the revocation of Article 370, including one in the city of Srinagar on August 9 that involved thousands of people.