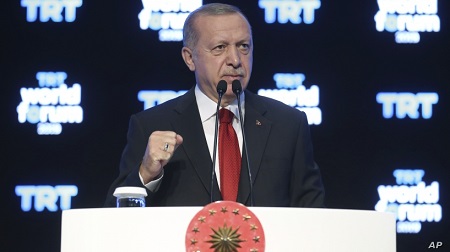 ISTANBUL - Turkish President Recep Tayyip Erdogan is ramping up pressure on his Western allies, as the end of a U.S.-brokered cease-fire approaches with Syrian Kurdish rebels.

With international pressure continuing to grow on Ankara to end its military operation against the rebels, Erdogan lashed out at criticism of the operation in northeastern Syria.

"The West sided with terrorists, and all of them attacked us. These include NATO countries, as well as European Union countries. Weren't you against terrorism? Since when have you been acting with them?" Erdogan said in an address Monday.

Turkey earlier this month launched Operation Peace Spring against the Syrian Kurdish militia, YPG, which Ankara considers a terrorist organization linked to an insurgency inside Turkey.

The YPG is the main component of the Syrian Democratic Forces, a crucial U.S. ally in the war against Islamic State. U.S. Vice President Mike Pence brokered a 120-hour cease-fire last week to allow the YPG to withdraw.

With the withdrawal set to end Tuesday evening local time, Erdogan is warning Washington of its responsibilities to enforce it.

"We expect our American allies to keep their promises this time," he said Sunday.

"We have 35 hours left. If they don't withdraw, our operation will resume. This is also what we agreed with the Americans."

SDF forces are reported to have withdrawn from Ras Al-Ayn in northeastern Syria. The town was the center of the heaviest fighting in the Turkish operation.

Ankara is demanding the withdrawal of all Kurdish militia from a 450-kilometer-long strip to a 30-kilometer-deep strip from the Turkish frontier. The SDF maintains it only agreed with Washington to a partial withdrawal.

Adding to the confusion, analysts point out that the U.S.-Turkey deal does not specify the parameters of the withdrawal and size of a "safe zone" that Ankara seeks to create.

The ambiguity is heightening suspicions that Washington struck different deals with the SDF and Ankara in a bid to score a diplomatic victory, albeit a temporary one.

"V.P. Pence's Ankara visit looks as if the point was to merely announce a 'deal' rather than to implement one," said former senior Turkish diplomatic Aydin Selcen. "Whether Pence and (Secretary of State Mike) Pompeo's duo actions are directed to cater to White House's internal political narrative or towards achieving tangible change is beyond me."

For Ankara, the Syria operation is not only aimed at addressing security concerns, but at creating a buffer zone large enough to accommodate up to 2 million Syrian refugees in Turkey.

Erdogan is expected to try to secure Putin's support to create the safe zone during talks Tuesday in the Black Sea city of Sochi.

"In this trip, Mr. Putin and I will tackle the (cease-fire) period and will hopefully take the necessary steps," Erdogan said Monday.

"President Erdogan is flying to Sochi to summit with Putin to expand Turkey's footprint in northeast Syria, but his chances of finding sympathy are slim," said analyst Atilla Yesilada of Global Source Partners.

Erdogan and Putin have struck up a good working relationship on Syria, despite Turkey backing Syrian rebels against the Russian-backed Damascus government.

Analysts suggest there is a limit to that cooperation.

"Russia wants to stop this entrance of Turkish forces from going deeper into Syria," said international relations professor Huseyin Bagci of Ankara's Middle East Technical University. "This is not in the interests of Russia or (Syrian President) Bashar al-Assad, so the message is not to go any further."

Putin is performing a careful diplomatic balancing act. The Russian president offered support for the security dimension of Turkey's military operation, but so far has not backed Ankara's plans for the mass return of refugees.

Analysts suggest Putin may offer Erdogan a more limited zone in Syria, extending only five kilometers into Syrian territory. Syrian government forces have already taken control of the critical towns of Kobani and Manbij as part of a deal with the SDF in response to Turkey's operation.

"Russia paving the way for Assad's side to conquer Manbij and more importantly, Kobani, is a huge blow to Erdogan's plans to resettle 1- to 2 million refugees," Yesilada said.

"The question is how is Erdogan going to have a policy of face-saving," said Bagci. "He is too much engaged in not meeting Assad personally. But he gave the indication more and more he is receptive to government talks. The Turkish defense and intelligence services, they talk to the regime. Only the two presidents don't exchange words with one another."