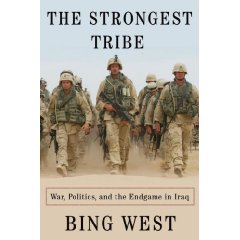 This author needs no introduction. Francis "Bing" West is the author of The Village, the definitive depiction of the Marine Combined Action Program in Southeast Asia. He is also is a Marine combat veteran of the Vietnam war, a former RAND analyst, and at one time occupied the hallowed halls of the Pentagon as a political appointee during the Reagan Administration. Over the years, he has been a staunch advocate of the infantryman, that long overlooked asset in our national arsenal.

Since the beginning of Operation Iraqi Freedom, West has been one of the most prolific and most respected reporters of the war. No author has matched, both in volume and in grim color, the past five years of fighting better than this author. His The March Up coauthored with MajGen Ray Smith, USMC) captured the drive of I Marine Expeditionary Force from Kuwait up to Baghdad from the grunt's perspective. Mixing his broad grasp of national policy to the basic tactics that keeps a young Marine alert and alive, West's battlefield narrative outshone all competitors for its tactical detail and marked sympathy for today's young Marines and all that they endured to topple Hussein's regime. The heat, fine sand, and fear of that campaign are captured with greater granularity and credibility because the authors lived through it at the front line, embedded with the 1st Marine Division, General Jim Mattis' beloved "Blue Diamond."

No True Glory came next. This book centered over the Marines again and their two fights in the caldron of the Iraqi insurgency in Fallujah. West's masterful overview of the epic battle for Fallujah of November 2004 laid bare the tissue thin connections between American policy makers in Washington and the fearsome combat conditions of Al Anbar. I strongly recommend that our Presidential candidates and their prospective team read each page of that book as preparation for their duties in the White House.

West's latest effort may also become required reading for future policy makers, most of which, given the demographic make up of the United States, will not have worn their country's uniform or ever visited a combat zone.

In The Strongest Tribe West takes a step back and looks at the war in a comprehensive manner. The prose is clipped and the action concise and to the point. He briefly reviews the early "successful" military phase of 2003, and cursorily covers the planning failures and slow adaptation that allowed the insurgency to build in 2004. These four chapters serve as a useful foundation for the following section of three chapters which describe the inadequate means, contradictory goals and lack of understanding that perpetuated American actions in Iraq in 2005.

The book is centered on what the author calls the Second War, the fight against Al Qaeda in 2006. This section provides the most detailed account of the efforts by the coalition to stiffen resistance against Al Qaeda's campaign of coercion and assassination. It also connects the dots in the Bermuda triangle between perspectives in Washington, Baghdad and Al Anbar. Here West provides some very original reporting on how the White House eventually came to the conclusion that simply "staying the course" was a losing strategy. Eventually, the President, his NSC staff, and a new team at the Pentagon came to agreement on a new strategy and a new team to implement it. In this chapter, the author proves that he can report on the machinations of the NSC bureaucracy and the even more turgid thinking of the Joint Staff with the same relentless quest for ground truth that he did in Baghdad, Ramadi and Fallujah.

West does not pull punches, and the incident in Haditha in 2006 comes in for close examination. Leadership and tactics deplorable. But West saves his strongest condemnation for politicians, including Congressman Murpha, for rushing to judgment.

The best parts of the book involve the implementation of that new strategy by Generals David Petraeus and LtGen Raymond Ordinero in 2007. Petraeus's COIN manual, which was developed in cooperation with a team of Marines led by General James Mattis when he was the CG at Quantico comes in for some unsubstantiated criticism as an academic exercise in sociology. While FM 3-24 has imperfections, it was written with great urgency by solid professionals who provided a historically-grounded approach for Iraq in 2006. While the manual may be a bit long winded in sections, it has served its purpose well and The Strongest Tribe provides ample testimony for its utility.

There is much in this book to commend it to Marine readers. Now is the time to begin to draw lessons from Iraq. Some of the conclusions in The Strongest Tribe will not surprise you, others infuriated me. It lays bare the failings of our military leadership early in the war, as well as the faults of our political leadership who too often ignored inconvenient facts and too readily embraced news when it fit preconceptions. West is fair with his litany of mistakes, and gives credit where due to Army and Marine leaders like General Petraeus, BGen John Allen, USMC; LtCol Dale Alford, USMC; and Army Colonels H.R. McMaster and McFarland for their intellect and professional acumen. The best parts of this book depict how the U.S. military persisted in its mission and how it adapted itself to the point where success over Al Qaeda can now be claimed.

The strongest test of our profession will be how ruthlessly and objectively we can assess ourselves and move forward to best posture ourselves for the ever evolving character of conflict in the 21st century. The Strongest Tribe is a great product to start our self-assessment with.