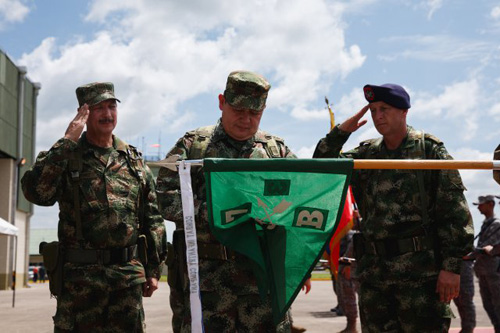 FLORENCIA, Colombia -- Every December 7 for the past 16 years, Colombian soldiers from the National Army's Special Anti-drug Brigade (BRCNA) have gathered in Larandia, Florencia for an end-of-year ceremony to celebrate the unit's anniversary and recognize distinguished service.

"Today we commemorate sixteen years of a permanent fight against drugs in a ceremony where all Colombians can recognize the special counternarcotic brigade's hard work against drug trafficking," said BRCNA Commander Colombian army Col. Walther G. Jimenez. "However, the ceremony is also an opportunity to thank all the people who have helped this brigade develop in its operations."

Operations that for sixteen years have weakened drug trafficking along the foothills of the Andes mountain range in Colombia's eastern cordillera.

Although USSOF worked with the unit during exchange training since its creation in December 2000, it was not until 2014 when the Green Berets began to train the BRCNA to meet operational needs, said a U.S. Special Forces team leader currently working with the Colombian special unit.

Since then, four Operational Detachment Alpha teams have made training recommendations to improve the BRCNA's effectiveness based on planning observations and while monitoring the unit's operations from miles away.

"They bring us that differential training that's so important to us," said the BRCNA commander. "Our soldiers are proud to receive the American Soldiers' training and support that continues to make us better and better."

According to a Colombian military report, since the unit's activation 890 thousand hectares of coca cultivation have been destroyed, 107 tons of finished or in-process cocaine have been seized and destroyed, and 854 narco-terrorists of different illegal groups have been killed in combat or placed in the hands of authorities.

"Every time we do an operation we do better with the training and the assistance that the [7th SFG (A)] detachments give us," said the BRCNA commander. "For those reasons, we decided to give them the medal that we receive when we go to combat."

Fittingly, several general officers attended the ceremony and conferred the military medal, which is detailed with each of the Colombian army's military branch colors, for "Distinguished Services in Operations against Drug Trafficking" onto the B. Co., 3rd Bn., 7th SFG's (A) guidon.

"For us the award is in recognition of 7th group's commitment to the unit," said the ODA team leader, who has led the unit's training in Larandia three times since 2014. "It signifies the importance of the relationship we have and solidifies that relationship going forward."

"The 7th Special Forces Group Soldiers have always left the BRCNA unit in high regard," said the BRCNA commander. "That is why all Colombian special forces soldiers recognize them, admire them, and respect them for all the work they do here."

Notably, the BRCNA also individually recognized seven State Department members from the U.S. Embassy in Bogota with the same award, known in Spanish as the "Bandera de Guerra," for their contributions to the unit.