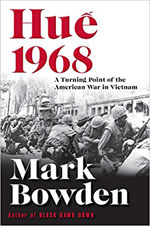 Mark Bowden’s account of the Battle of Huế—“the bloodiest of the Vietnam War, and a turning point not just in that conflict, but in American history”—is an extraordinary feat of journalism.

Like all battle histories, it concerns military units, their movements and casualties. Like the best of such histories, it makes brilliant use of contemporary records and of previously untapped archives. It tells the story from the points of view of American and Vietnamese politicians and generals as well as the battle’s participants and civilian witnesses. “Huế 1968” is expertly researched military history, but, as Mr. Bowden writes in his source notes, it is “mostly the work of a journalist,” the result of four years of travel, investigation and, above all else, interviews with those who were there. In this last element—the first-person, human element—it’s a battle history alone in its class.

“Huế 1968” doesn’t expound either side’s purported ideals or assumptions, nor does it deal in foreign-policy generalities like the domino theory. It deals instead with these generalities’ consequences in a battle that can stand as an epitome of the entire war. Those consequences were, and remain, myriad and complex. One reason I call this book an extraordinary feat of journalism is that Mr. Bowden makes events vivid and easy to understand for a reader with no military experience and only limited knowledge of the Vietnam War. The results are in every way worthy of the author of “Black Hawk Down” (1999), Mr. Bowden’s meticulously reported account of the Battle of Mogadishu.

The Battle of Huế began during the pre-dawn hours of Jan. 31, 1968, the first day of the Lunar New Year, known in Vietnam as Tet. Huế (pronounced “Hway”) was Vietnam’s capital from 1802 to 1945; in 1968, it was the South’s third-largest city and the largest near the demilitarized zone dividing the communist North and the American-supported South…

My husband and I face the…

My husband and I face the world as a team

Being submissive in relationships doesn't mean being silent

Giving up control in relationships is not easy

Intimacy and romance in relationships

A small but touching act of kindness

In moments like this, I turn to my reliable support. I always had problems writing various papers during my college days. Friends advised me an excellent platform https://paperell.com/buy-research-papers where I ordered a research paper and then passed everything perfectly. I can say if you do not know how, then let experienced people do it.