Baghdad at Sunrise: A Brigade Commander's War in Iraq 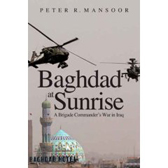 It is hard to objectively evaluate a book that is "blurbed" on the back by the likes of General David Petraeus (now Commander, U.S. Central Command), Dr. Conrad Crane (chief editor of FM 3-24 Counterinsurgency), H.R. McMaster, Tom Ricks and Wick Murray. They have all endorsed the book as a masterful memoir of the post-conflict period in Iraq's capital from a commander's viewpoint. What can anyone else find to say that this suite of insightful soldiers and scholars have not?

Even worse, the book includes a brief foreword from Donald and Fred Kagan, about as powerful a father-son pairing as one will ever find among historians and public intellectuals today. The former is a highly respected historian of classics who teaches at Yale, from which the latter also graduated. Fred Kagan, after a decade at West Point, is now a resident fellow at the American Enterprise Institute. They supervise a series for that school's university press which is intended to "present the keenest analyses of war in its different aspects, the sharpest evaluations of political and military decision making, and descriptive accounts of military activity that illuminate its human elements."

They certainly scored a home run with Baghdad at Sunrise. It offers a compassionate, candid and comprehensive account of a brigade commander's tour in Iraq. The author served as the Commander of the 1st Brigade, 1st Armored Division known as the Ready First Combat Team" during that confusing period after the toppling of the Bathist regime and the all too quick transfer of responsibility to an interim Iraqi governing group. The author provides a keen depiction of events on the ground, and his understanding of the decision making that was guiding his unit's activities in the grim and grimy streets of Rusafa and Adhamiya in central and northeast Baghdad. This sector is sandwiched between the Tigris and the slums of Sadr City. Mansoor's "Ready First" struggled to bring order out of chaos, neutralized the national insurgents, and fought the increasing influx of Islamic militants from late May of 2003 until relieved in July 2004. In an area of some 75 square miles that was once home to over 2 million Iraqis, his brigade struggled to overcome the poor planning and lack of follow through that occurred back in Washington's policy making circles.

Mansoor's lens is often focused on the human dimension of this conflict, especially his own soldiers. The book is dedicated to his entire brigade, but especially those that made the ultimate sacrifice. The circumstances around the loss of each soldier, including his Command Sergeant Major Eric Cooke, is carefully detailed. These soldiers "made their stand in the cradle of civilization in an effort to ensure that the progress of mankind continues, and that it will be an evolution worthy of the twenty-first century, not the seventh."

The author is very well equipped and well positioned to evaluate the historical underpinning and decisions about the war. He is one of those unique soldier-scholars, able to apply perceptive insights from history with a rigorously trained and analytical mind, with the skills of a senior combat commander. Colonel Mansoor earned a PhD from Ohio State University in military history, and has taught at the U.S. Military Academy. He is now the Raymond Mason Chair of Military History at Ohio State University. After command in Iraq, he served as the founding director of the U.S. Army and Marine Counterinsurgency Center at Leavenworth, and was detailed to the Chairman, JCS study group of colonels that evaluated U.S. military strategy in Iraq (the dust jacket inaccurately states that this group proposed the surge strategy). From 2007-2008, he was General Petraeus's executive officer at Multi-National Force-Iraq where he got to see the evolutionary progress he and his brigade has so relentless worked towards. The return to civilization in Mesopotamia is now within grasp, but only if the Iraqis want it.

The author concludes with a chapter titled "Reflections" that alone is worth the price of the book. This chapter synthesizes his year of command and provides battle-hardened lessons learned about insurgency. Underscoring points made by now retired LtCol John Nagl, Mansoor forcefully presents a need for greater adaptation by the U.S. Army. Its culture "must change, or the organization will be unprepared to fight and win the wars of the twenty-first century. While retaining the ability to conduct major combat operations, the Army must change its culture to embrace missions other than conventional land force combat"

Echoing concerns raised by Bing West in his highly regarded The Strongest Tribe, Mansoor worries about the relationship between the American people and its professional army. "American cannot long remain a superpower if we think that our wars can be fought solely by the small sliver of society that populates our professional military forces," he observes. However, the author provides no recommendations on how we can best attain this closer relationship. This reviewer is of the opinion that the fault does not lie with the American people, but with our senior elected officials.

This is an exceptional memoir that decades from now will still be ranked as an insightful but especially candid history of the war. Mansoor is the rarest of commanders, —to point out where his own decisions or judgments were flawed. It will appeal to general readers looking for intimate details and honest assessments on a daily basis from a commander's lens. It is highly recommended for prospective military leaders as part of their preparation for higher command. Simply stated, it is an impressive account that all prospective brigade, regimental and battalion commanders should read.

Frank Hoffman is a retired Marine infantryman who serves as a research fellow at the Marine Corps Warfighting Laboratory. He is also a non-resident Senior Fellow at the Foreign Policy Research Institute, Phila, PA.