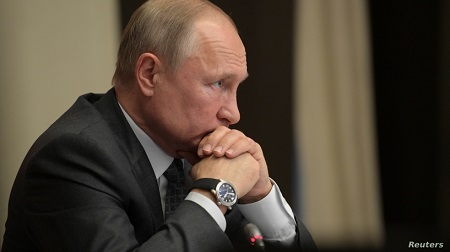 MOSCOW - Russian President Vladimir Putin is presenting himself as a peacemaker in the Middle East, the go-to arbiter to whom all regional leaders can turn to, secure in the knowledge that he considers incumbency a good thing and regime change bad, analysts say. When it comes to neighboring Ukraine, though, the picture is different.

Russian-backed separatist forces have increased attacks in recent days, and Wednesday mounted a heavy bombardment of Ukrainian defensive positions around the port city of Mariupol, according to both the Ukrainian government and independent observers.

Pro-Moscow separatists opened fire on Ukrainian forces more than 30 times on October 16, killing a Ukrainian soldier and wounding another in the process.

The day before, two Ukrainian soldiers were killed by a sniper, according to Ukrainian military officials.

Ukrainian officials also accuse Russian-backed forces of engaging with 82 mm mortars, proscribed under the 2015 Minsk agreement struck between Russia and Ukraine. The agreement aimed to resolve the conflict in eastern Ukraine’s Donbas region — a Moscow-fomented insurgency that’s claimed more than 14,000 lives since it erupted in April 2014, shortly after Moscow annexed Ukraine’s Crimea peninsula.

Why Kremlin-sponsored forces have been intensifying their attacks is unclear and goes against the grain of recent moves by both Kyiv and Moscow to get down to serious negotiations and finalize a peace deal which would see two breakaway republics in the Donbas become self-governing, although still part of Ukraine.

The outlines of the plan, based on a proposal known as the Steinmeier formula, named after the former German foreign minister who proposed it, envisages separatist-held parts of the oblasts, or provinces, of Donetsk and Luhansk holding elections. Following elections they, or a larger part of the region, could be given special autonomous status. Under the plan, elections have to be free of Kremlin influence and Ukraine would once again take control of its border with Russia.

The plan was welcomed by the Kremlin earlier this month with Putin spokesman Dmitry Peskov saying he expected a date to be set shortly for four-way peace talks including France, Germany, Ukraine and Russia. He described the plan as a “positive and, without doubt, important step.”

Earlier confidence about a possible breakthrough increased when Ukraine and Russia engaged in a mass prisoner swap in September, in which each country swapped 35 captives each in biggest exchange since 2014.

The Kremlin has been dragging its feet, though, Ukrainian officials say, despite continuing talks in Minsk, the capital of neighboring Belarus. Negotiators have failed to reach agreement on a timetable for the mutual withdrawal of soldiers and weapons near the Donbas frontline towns of Petrivske and Zolote, according to Martin Sajdik, the envoy of the Organization for Security and Cooperation in Europe.

He still holds out hope a deal can be struck, but lamented the number of armed clashes in the Donbas, which he says have increased dramatically.

“Unfortunately, I can’t speak positively of the cease-fire regime,” he said Wednesday. “The number of violations has spiked,” he added.

Russia blames Ukraine for the continued fighting. Oleksii Reznikov, Ukraine’s representative at the ongoing talks in Minsk, however, says it is the other way around. In an online commentary, he said, “In recent days, Russian officials have actively replicated the distorted information about the alleged disruption by the Ukrainian side of the process of disengagement of forces and hardware in the areas of Zolote and Petrivske [two frontline towns] which was agreed in Minsk on October 1, 2019.”

Under the terms of the peace plan, a cease-fire would have to hold for at least seven days before mutual disengagement started. According to Darka Olifer, a Ukrainian diplomat working with the negotiating team, the pro-Russian forces “are not pulling heavy artillery off the contact line, but deploying tanks and mortars to the front instead.”

Ukrainian President Volodymyr Zelenskiy last week accused Russia of delaying the peace process, pointing to Moscow's insistence that Kyiv pull back its troops first, instead of each side withdrawing simultaneously..

Aside from the uptick in clashes, there has been no letup, say Ukrainian officials and independent social media monitors, of a highly aggressive and coordinated trolling and ‘fake news’ campaign by Kremlin-tied outlets with Ukrainian statehood, leadership and language ridiculed and the country mocked as a plaything of NATO.

The continuing media campaign stands in contrast to recent remarks by Putin, who in early October expressed dissatisfaction with the negative coverage of Ukraine in Kremlin-controlled media, saying, “We should not cast our closest neighbor and fraternal nation in some kind of unfavorable light.”

For Ukraine’s president, the increase in attacks and unrelenting propaganda drive against Ukraine by Russian trolls and television outlets is making it harder to sell the Steinmeier formula to skeptical Ukrainians and political opponents. On Monday, thousands of Ukrainians joined a march through Kyiv led by nationalist parties and veterans' associations to protest against the peace plan dubbing it a “capitulation” to Russia.

Protesters banged drums, carried the flags of Ukraine and political parties, and chanted slogans such as “Glory to the nation, no to capitulation!” Some protesters placed bouquets of flowers at military memorials. The protesters included Ukrainians from across the political spectrum, including far-right nationalists, liberals and supporters of closer integration with Europe. Many of them complained the peace plan risked formalizing Russian influence in the country, which would distort Ukraine’s future.

Zelenskiy aides hope his high personal approval ratings will help him sell any peace deal eventually agreed to. Recent polling, though, shows most Ukrainians oppose granting special status to the regions held by separatists. In June, however, a poll also found that 50%  of Ukrainians expected Zelenskiy to end the shooting.

During a 14-hour press conference last week, Zelenskiy, who portrays himself as a ‘president of peace,’ said ending the war was his most important goal. With Ukraine in the eye of the U.S. impeachment storm in Washington, some analysts worry Zelenskiy’s position is weakening internationally and he won’t be able to rely on solid bipartisan U.S. support in his standoff with Russia. That, in turn, could encourage Russia to prolong the talks, hoping to gain even more concessions.

Some analysts have from the start, however, been skeptical of the Kremlin’s peace intentions, arguing it will say one thing but do the other, engage in talks but keep the pro-Moscow insurgency going. They say the talks are just being pursued by the Kremlin to toy with the West and to explore possible rifts among Western nations on whether to maintain sanctions on Russia, initially imposed for the 2014 annexation of Crimea.

According to Adrian Karatnycky, an analyst at the Atlantic Council, a U.S. think tank, “Putin wants either to dominate or dismember Ukraine. A peace deal will do neither. And when his popularity drops, he needs external foes. So, maybe I’m missing something, but I do not see a peace deal for a country which Russia’s president believes is part of the Russian people, when Moldova and other regional hotspots are unresolved for decades.”