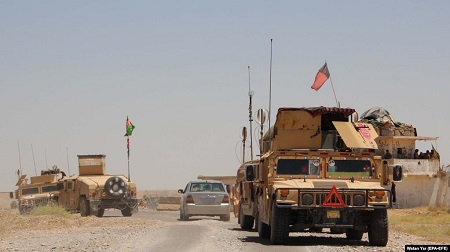 Afghan authorities say Taliban militants have suffered heavy casualties in the latest security operations in several provinces across the country.

A Taliban commander and six other militants were killed in clashes in Parwan Province north of the capital, Kabul, provincial police chief Muhammad Mahfooz Walizada said on September 22.

Walizada identified the Taliban commander as Mullah Qudus. He said the militants were killed in an operation near the provincial capital, Charikar, late on September 21.

Military officials in Ghazni Province said at least 16 Taliban fighters were killed and more than 25 others wounded in overnight operations in Muqur, Rashidan, and Waghaz districts.

A Taliban shadow district chief was killed in the northern district of Zari in Balkh Province, Afghan officials said in a statement.

Mawlawi Gul Ahmad and other eight other Taliban militants were killed in clashes late on September 21, the statement added.

It said the clashes began after a group of militants led by Gul Ahmad attacked security forces deployed in the area. The troops, backed by air strikes, repelled the assault, the statement said.

Two pro-government militia fighters were also killed and four soldiers were wounded in the clashes.

After heavy fighting in early September, the Taliban announced that it had overran Zari, but Afghan officials rejected the claim, saying the district remained under government control.

The situation in Afghanistan remains precarious as the country is set to hold this month its fourth presidential election since U.S.-led forces toppled the Taliban from power in 2001.