It kills soldiers and citizens alike. And if it’s not brought under control, it could kill the country’s fragile future.

“People have to understand that corruption isn’t about just money,” said Sopko, who heads corruption watchdog Special Inspector General for Afghanistan Reconstruction (SIGAR), the watchdog for the $113 billion that the U.S. has given the country. “It’s about lives."

He recalled a contract that was designed to protect Afghanistan’s hazardous roads from terrorist bombs. It went to an American company, with Afghans doing the work. The money was stolen, and the right work wasn’t done.

“The Afghan people should be as outraged as I am and U.S. taxpayers are about corruption,” he said. 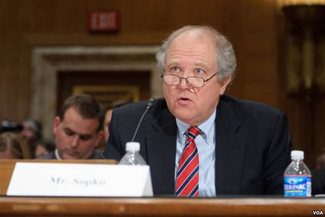 VOA File Photo - John Sopko, Special Inspector General for Afghanistan Reconstruction (SIGAR), testifies on Capitol Hill in Washington. Sopko says the main threat to the success of the war on terrorism is corruption.

In a rush to fill the vacuum created when the U.S. invaded Afghanistan to oust the terrorists responsible for plotting the 9/11 attacks, Washington and aid agencies pumped money into the poverty-wracked nation to help install a new government and start a development plan to overcome the poverty that breeds extremism.

While there were successes, the strategy also fed corruption in a country where it already was endemic.

“The U.S. did contribute to the problem, unintentionally,” Sopko said. “The U.S. and its allies probably gave too much money too fast to too small a country, such as Afghanistan, with too little oversight.

“When that happens, corrupt Afghans, corrupt Americans and corrupt contractors will steal money and then bribe officials. The blame is two-sided; it takes two to tango. The United States could have done a better job in overseeing the billions of dollars that were sent to Afghanistan,” he said.

SIGAR was created in 2010. Sopko, a former Justice Department prosecutor who fought organized crime at home, was brought aboard two years later. He discovered that while some money was lost to sheer waste, corruption ate up a large chunk of what was left. And not all of it went to line Afghan officials’ pockets.

SIGAR also is working with the Afghan government to turn around a long tradition of corruption in its ministries.

While he wishes the current Afghan government would do more, he has found them a more willing partner than the previous administration.

“They have to have a willing partner. Up to now they have, and we hope that continues,” Sopko said.

Still, mistrust of the government is pervasive. SIGAR has set up a confidential hotline for citizens to report corruption.

“Many of our best cases come from brave Afghans who have contacted this hotline,” said Sopko.

Getting rid of corruption is also key to fighting Afghanistan’s drug problems. And both are critical to fighting terrorism.

Sopko said President Ashraf Ghani warned, years before he became the country’s leader, that Afghanistan had the potential to become a narco-terrorist state.

“And it’s trending that way because no one is seriously addressing the narcotics problem,” Sopko said. “We hope the Afghan people and the new American administration will be more aggressive.”