For more than a year, we have been engaged in the Presidential campaign.  Ultimately we will have the opportunity to vote in both primary and final elections for a President.  Every one of our citizens will have a polling place to go and cast a ballot.  Concurrently, we will have thousands of citizens that cannot go to their precinct or record-they are called uniformed members of the Department of Defense.  However, Lincoln recognized both the inequity and the meaning of this circumstance and he established the first absentee voting system for those engaged in our Civil War.  For every engagement since and in periods of peace, our deployed personnel have been able to cast a ballot at wherever they may be located to participate in this most important aspect of our citizenship.

The Grunt's polling place is wherever the mail finds him.  Some are in buildings, ships and planes.  Others, the Infantry in particular, are in the open doing what they have been directed to do. They may or may not vote but they will maintain their precinct or die trying-as many have.  Here is a snapshot of one precinct and a member-citizen at work for us.

This is what the Infantry sees and does on bad days in their precinct. Look at the image carefully. It tells a great deal that you will not see in movies or read in books. No reality TV show can depict what this man has been through and is going through. His helmet chin strap is off-as he had it knocked off several times and is now in haste to move around his position. His canteen is partially out of its holder-he has extracted all he can to satiate the continuous thirst that Adrenalin, temperature and emotion wracks on the body. His rifle, held at the ready, holds a bayonet on the barrel. This is a very rare occasion and clearly required-the enemy is very close and getting closer. Where he and his unit now are is decidedly primordial. He knows he will need it if not already used it in a truly desperate situation. The ejector cover is open indicating the rifle has been used already and is about to be used again. His shirt is sodden with sweat and dirt but it is the least of his concerns. Those lie beyond his gaze and to his front. He is mortally engaged with a large aggressive force and the pressure is such that he has to personally act as a Grunt rather than issue orders and supervise as his rank would dictate. His eyes tell you the situation is desperate. He is an Infantryman doing what we expect him to do on our behalf. We see the parades and honors and applause in the airports-but only those that have been there have seen what he actually does. Our candidates all announce their capability to be Commander in Chief but it is doubtful any truly understand what occurs in these distant precincts.  His image could pass for the vast multitude of men throughout our history that on occasion have had that look, that desperation and that will to persevere to success if not merely to survive-which is success in itself.  As in our land, some precincts are friendlier than others. This is Lt Rick Rescorla on LZ X-Ray-credited by the Battalion Commander, with probably saving the perimeter. He is in the process of doing that with no knowledge or interest of the larger issue.  He and many others did and will vote and we should appreciate the reality of their polling places. 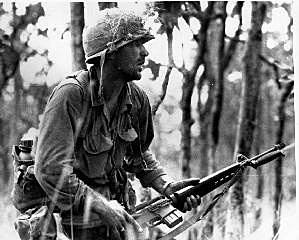 Rick did not change when he returned from Vietnam. He was last seen running up the stairs of the World Trade Center when everyone else was running down. His intention then as it was at X-Ray was to shepherd his flock to safety. He went down with the towers but he extracted the bulk of his people. Infantry develops lasting traits and it’s a good thing.

When you leave your house to vote, remember that the most important precincts are the ones you can't see.