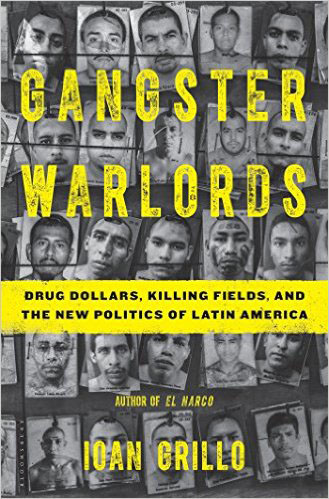 Ioan Grillo has served as an international media reporter in Latin America since 2001 and is fluent in Spanish. Most of his experience comes from his in-depth coverage of the Mexican narco wars, from which he authored El Narco: Inside Mexico’s Criminal Insurgency (Bloomsbury 2012). His new book, unlike his earlier one, takes a much broader perspective on the crime wars that have broken out in many areas within the Americas. In many ways, it can be considered an evolution of his thinking concerning this broadening Western Hemispheric security concern.

To be quite truthful, the reviewer is both amazed and at times abhorred by the situations Grillo—‘a crazy Brit’— placed himself in while working on this book. His hanging out with heavily armed and drugged Shower Posse members in Tivoli Gardens (essentially a garrison or fortified ghetto) is just one illustrative example. This is very much reminiscent of the work Gary ‘Rusty’ Flemming and Robert Young Pelton have done in the past related to Mexican cartels/gangs and global combat reporting, respectively. It signifies the important investigative role independent journalists and filmmakers can make via their ability to safely gain interviews with violent non-state actors on their own turf while the rest of us—and in particular police and military officers and governmental agents—would likely not survive such ‘snake pit’ encounters.

The work is divided into six major sections comprising 51 chapters, acknowledgements (which include numerous SWJ—El Centro fellows), an image gallery containing 17 color photos, bibliography, notes, and an index. Part I of the book entitled ‘War?’, which incorporates Chapters 1-3, provides us with an overview of the phenomenon of crime militias—hybrid criminal organizations—which have emerged in Latin America and the Caribbean. The reality that Washington D.C. has no coherent strategy to respond to it is mentioned as well as the fact that U.S. politicians can no longer afford to ignore this growing problem. A few theoretical views on what is taking place—derived from Ben Lessing (“criminal conflicts”), Robert Bunker (“blurring of crime and war”), Martin van Creveld (“transformation of war”)—are then provided along with a more in-depth overview of the four case study focus areas.

The majority of the book, Part II to Part V spanning Chapter 4-47 is then composed of case studies.  These four major case studies focus on 1) the Red Commandos found in the flavelas (slums) of Brazil—specifically Rio de Janeiro, 2) the Shower Posse in Kinston, Jamaica, 3) Mara Salvatrucha in the Northern Triangle of Central America (e.g. Guatemala, Honduras and El Salvador), and 4) the Knights Templars in Michoacán, Mexico.  For the non-specialist, these case studies provide enlightening views into communities seldom encountered except for the occasional newspaper article or cable/TV news headline referring to some atrocity being committed. Background histories on crime family bosses are provided as are relations between gangs and their local communities and the federal state itself. Drug production and trafficking is discussed—like crack cooking methods and vaginal coke smuggling—and numerous instances of violence and corruption are highlighted. Each case study is meant to provide a piece of the puzzle concerning the broader trend of the emergence of these crime militias plaguing the Americas.

Ultimately, Grillo comes to the conclusion that a new type of criminal leader—the Dudus (Shower Posse) or Heriberto Lazcano (Los Zetas) ‘Gangster Warlord’ archetype is emerging that combines attributes of a gangster running rackets with a militia leader controlling selective components of their own turf or fief (p. 166). In the first chapter (Chapter 48) of the concluding section (Part VI Peace?), the author comes up with these keen observations:

In searching for the solution, it helps to come to terms with what the problem really is. Governments find it uncomfortable to admit that cartels and commandos clearly challenge the nature of the state and its monopoly on waging war and administering justice. The fact that gangsters have won genuine support in some marginalized communities is also a painful truth.

The twenty-first century has thrown up a world where irregular forces with scattered cells of combatants provide an immense challenge for democratic governments. Light infantry weapons are everywhere, and it is easy for criminal gunmen to communicate and move money. Governments find their tanks, warships, and bombers are useless against the ragtag criminal militias. They often choose stalemates as the best option (pp. 330-331).

Further, Grillo sees these crime militias as shadow powers—rather than alternative governments or emerging state forms—which are seeking impunity of action and nothing more. This perception is of interest because theoretical debates are being conducted between this view and the one that believes de facto control of a town or region at some point creates alternate criminal governance even if this was not the cartel or gang leaders’ original intent. The author then goes on to compare what is essentially the criminal insurgency construct—first developed by John Sullivan—with that of more ideologically derived insurgency linked to Islamic radicalism or Maoism which seeks to create a parallel state. One component of such alternative governance is the takeover of local schools and their curriculum for ideological indoctrination (p. 331). This direct approach is in contrast to the indirect approach conducted by crime militias who by their very nature also environmentally modify the ‘civilization’ of their territories. In this instance, they re-socialize those populations within them to narcocultura (narco culture) or maracultura (gang culture) patterns of human social interactions and values.

Policy recommendations related to Grillo’s specific recognition of “crime militias as shadow powers” were then provided in the final three chapters of the work. Chapter 49 discussed drug policy reform by focusing on marijuana legalization—to undermine some of the gangs and cartel revenues—and shifting from a war on drugs to drug use as a health issue/addiction treatment approach. Chapter 50 highlighted the need for new judicial and policing institutions in societies that are democratizing. These public institutions in the country case studies are still essentially authoritarian holdovers from earlier eras that have not modernized. The U.S. and other nations should lend support to building new institutions rather than providing foreign aid to support old ones. Corruption of politicians is also singled out as an issue that must be directly dealt with because they act as facilitators to the rise of powerful groups such as the Shower Posse and Knights Templars. Chapter 51 discusses ways of transforming ghettos by means of a ‘hearts and minds’ counter insurgency-like approach coupled with physical community improvements such as paved roads, reliable electricity, and garbage pickup. Of all the policy recommendations provided, this chapter came across as the weakest one. Grillo’s recommendations are more ethereal and are directly up against limited state capacity writ large in Latin America and the Caribbean and an economic system that accepts excess populations—which are marginalized, untrained, and exist outside of the formal economy—as acceptable losses/casualties of capitalism and globalization.

In summation, this is an excellent work derived from a number of years of intimate interviews and field reports conducted by Grillo. This work is dominated by the killing, illicit activity, and state weakness the author has seen via his interactions with heavily armed non-state group members in marginalized communities and slums. This makes the work deadly accurate concerning the ‘on the ground’ observations provided. It also informs us that the old verse about “mad dogs and Englishmen” might be deserving of a new stanza related to ‘going out into heavily armed slums’. Given Grillo’s training and background, the work is at times more journalistic than analytical and also light on theory. This, however, makes the book highly readable and also far more appealing to a much larger readership.  Further, with Grillo’s street smarts, the impressions he provides related to the interviews he conducted help to serve as a form of  ‘bullshit detector’ to help place in context what is being said.

Gangster Warlords should be considered an extremely useful book for readers with current affairs interest, law enforcement and military professionals, and advanced undergraduates and graduate students in security studies. For the later, however, I’d layer the use of the book—which is light on theoretical references—with more scholarly focused ones such as Gangster States (Palgrave Macmillan 2015) by Katherine Hirschfeld or Global Security Upheaval (Stanford 2013) by Robert Mandel, whose academic focus would benefit, in turn, from a dose of the visceral street reality so well brought to life in the Grillo work.