International Conference On Promoting The Rule Of Law In Mexico

International Conference On Promoting The Rule Of Law In Mexico

An important bi-lateral U.S.-Mexico conference on “Promoting The Rule Of Law In Mexico” was held at the University of San Diego on Friday 10 June 2016.1 One hundred and twenty individuals from state and federal U.S. and Mexican governmental agencies, academia, legal firms, and private industry attended the all day conference. The event was coordinated by the Justice in Mexico Program and the University of San Diego School of Law with major support provided by the U.S. State Department OASIS (Oral Adversarial Skill-Building Immersion Seminar)2 along with the U.S. State Department MERIDA Initiative, the MacArthur Foundation, Sempra International, COPARMEX, the San Diego County Bar Association, and the San Diego Diplomacy Council. All the sessions were conducted in either English or Spanish—depending on the speaker’s prerogative—with translation services provided in the alternative language for conference attendees by means of wireless headphones. 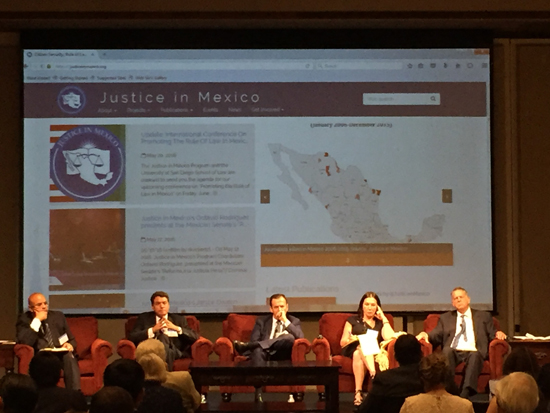 Panel 1: From the Bench: Judges’ take on Justice Reform

Key conference insights and lessons learned are as follows:

• The sweeping Mexican judicial reforms set out in 2008 have not been fully realized to date. The transitional process that was supposed to conclude in June of 2016 is nowhere near the point of completion. It will take continued cooperation and perseverance for the new legal system to work as intended.

• United States agencies have provided training services to Mexican judges and lawyers but many of these services have been halted recently. OPDAT, an office within the U.S. Department of Justice, has already assisted in the training of over 14,000 prosecutors from the PGR (Proceduría General de la Républica). A U.S. federal prosecutor involved in this program noted that Mexican trainees have been able to learn many things from Puerto Rico which was forced to transition to an accusatory system in 1902.

• Mexico’s legal education system is in need of reform as well. Many Mexican law students are not receiving proper training. In 2014, 60% of Mexico’s law schools were still teaching to the obsolete system. One conference attendee, who is a law student in Mexico, had never been taught to the new system.

• Corruption and violence remain a significant problem in Mexico and are perpetual obstacles to the pursuit of justice. Threats of violence against lawyers and judges are a legitimate concern. New anti-corruption efforts are being undertaken by the Mexican federal government as evidenced by the formation of the Specialized Ethics and Conflicts of Interest Prevention Office last year.

• Reforms to the prison system will be a necessary step in reforming the judicial system. Extortion carried out by prison guards is commonplace inside of Mexican prisons. These abuses work to perpetuate criminality outside of the prisons by forcing family members to produce money for bribery which is sometimes required up to three times a day.

• Prosecutors from Mexico and the U.S. share many of the same criminal targets. Cross-border cooperation has been hindered by worries of corruption and lack of institutional structure. Governmental bureaucracies on both sides of the border do not provide for the easy exchange of information.

• The U.S. judicial system is imperfect. There will always be some level of injustice and abuse. The reforms in Mexico are a step in the right direction but it is important to note that no system is without its flaws.

• It will take more time than expected to implement the judicial reforms but it is important to remain hopeful and diligent in working towards a better future.

The significance of the conference’s subject matter vis-à-vis the future of the Mexican criminal justice system cannot be overstated. Dr. David Shirk deftly provided the context related to this significance and its implications as follows:

The last major reforms we saw of the Mexican judiciary were in 1994, but these were focused on strengthening judicial review and the autonomy of the highest court, rather than the criminal justice system. The reforms that are now being finalized after an eight year implementation process are intended to modernize Mexico's criminal justice system, which currently suffers from ineffective criminal investigations, serious abuse of crime suspects, excessive dependence on pretrial incarceration, large case backlogs for prosecutors and courts, long and inefficient court proceedings, limited opportunities for an adequate legal defense, and enormous prison overcrowding. The net result of Mexico’s traditional criminal justice system has been pervasive impunity for the many perpetrators who are never apprehended, a presumption of guilt for the few suspects who are caught, and the ultimate dissatisfaction of victims and the public at large. The new criminal justice system gives prosecutors greater flexibility to prioritize important cases, places greater scrutiny on the evidence and procedures used in a given criminal case, and brings greater transparency to the process.

Khirin A. Bunker holds a Political Science B.A with honors from the University of California Riverside and an International Baccalaureate (IB) degree.  He has interned at the Claremont Institute for the Study of Statesmanship and Political Philosophy, SWJ El Centro, and a law firm and has studied abroad at the University of Cambridge, England.