Editor's Note:  This is the second installment in a three-part series.  Part I can be found here.  Part III will be published on Friday.

A Framework to Understand Drug Related Violence in Mexico

According to Phil Williams, drug trafficking-related violence in Mexico can be understood as a three-layered phenomenon.[1] The first layer is strategic competition, with violence used by drug trafficking organizations to control routes and increase their market share, thereby expanding profits. Indeed, as Mexican organizations became the main suppliers for the U.S. drug markets, the level of violence in Mexico grew along with the increase in financial incentives. At the same time, the contraction of the U.S. cocaine market made the competition even more intense and violent.

In this category, we can find the Sinaloa and Los Zetas criminal organizations. Regarding the former, this organization could be considered the criminal organization with a corporate approach to illegal business. Joaquín Guzmán Loera (A.K.A: “El Chapo”), is the charismatic CEO who, after escaping from a federal prison in 2001, gained legendary status, which was additionally enhanced by his recurrent membership in the Forbes list of the wealthiest men in the world.[2] Moreover, its penchant for innovation, smuggling techniques and expanding its territory by initiating turf wars with other organizations is a major driving force of violence. As Guillermo Valdés (former Director of the Center for National Security and Research – CISEN) explained, the Sinaloa organization turf wars with the Arellano Felix organization, Juarez and Beltran Leyva, account for more than half of the deaths in the country. The turf was with the Beltran Leyva brothers can account for more than nine thousand deaths in the states of Sinaloa, Sonora, Nayarit and Guerrero, which cannot just be explained as a result of personal animosities between the leaders of both organizations, but is mainly due the control over smuggling routes for 50 to 60 tons of cocaine bound for the U.S. market.[3] Similar to this situation is the turf war that this organization started in 2008 with the Juarez organization to gain control over the Ciudad Juarez plaza[4], which is considered a fundamental smuggling hub, and over the course of three years, yielded 7,386 deaths.[5]

On the other hand, the Los Zetas organization, although it began as a small defector force from the Gulf organization, quickly began to grow in strength by actively promoting military defections, bringing in former Kaibiles (Guatemalan Special Forces) and recruiting ex-policemen to the organization. The Zetas organization also began to establish control over local gangs, thereby creating a flexible and layered structure. This organization began to adopt a more entrepreneurial approach and moved into other illicit activities, like product piracy (DVDs and CDs) and alcohol sales to nightclubs, oil theft, human trafficking, extortion and kidnapping. This approach was accompanied by brutal and savage tactics, which enabled it to control between 13 and 15 plazas in a relatively short period of time. Of particular importance is the turf war that is currently being waged with the Gulf organization in the states of Nuevo Leon and Tamaulipas. After their formal separation in early 2010, the Gulf organization began a battle to protect its traditional hub (Matamoros), as well as to regain control of other territories (Ciudad Vitoria and Nuevo Laredo). This has had a negative external effect on violence in the neighboring state of Nuevo Leon, which has now become a major battle field for both organizations. As a result, from 2009 to 2010, the latter state saw a 500 percent increase in deaths related to organized crime, while the former a 1,419 percent increase in this type of death.[6]

The second layer is factionalism within the organizations, as well as contracting out to youth gangs and specialists in violence to carry out enforcement activities. Both processes have added elements of viciousness, callousness and unpredictability. The violence is no longer centralized, top-down, and disciplined. Instead, it is diffuse, driven by low-level decision-making, and the dissolution of effective command and control structures. Once again, it is possible that government efforts to combat the drug trafficking organizations might have increased the violence due to concerns about defectors and informants.

This layer can include several regional organizations like La Linea (enforcer group from the Juarez organization), the South Pacific Cartel, and the Knights Templar. After the Sinaloa organization began moving into Ciudad Juarez, La Linea was tasked by the Juarez organization at the forefront of the battle to defend this territory. Due to the steep increase in number of deaths (2007: 235 – 2010: 4,246)[7] the federal government initiated the Chihuahua Joint Operation, which initially deployed 2,500 military and federal police agents. As a result of law enforcement presence, La Linea leader José Antonio Acosta Hernández (A.K.A.: “El Diego”) ordered his operatives and the Aztecs gang to kill 15 people for each of the 7 criminal sectors Ciudad Juarez was divided into, in order to do what in criminal slang is called calentar la plaza (heat the plaza).[8] He was also responsible for the car bomb that exploded[9] in the city when Federal Police agents came close to investigate a crime scene, which killed four people and injured several more.[10]

On the other hand, the South Pacific organization is the biggest splinter group from the Beltran Leyva organization, and has relied heavily on brutal violence performed by enforcer groups (like the one headed by el Jesus Radilla, A.K.A “el Negro”) to protect smuggling routes as well as retail markets from other organizations and former fellow operatives.[11] Violent actions by this group lead to an increase of 200 percent in deaths from 2009 to 2010 in the state of Morelos.[12]

The Knights Templar (a splinter group of La Familia Michoacana), recruits young men who are trained both in the ideology of the organization as well as in brutal killing methods to protect the organization’s territory and its profits, as well as to intimidate enemies and society. This has resulted in 1,250 people killed execution style in the state of Michoacan alone in a four-year time span.[13]

The third layer of this approach emphasizes anomic violence, the degradation of norms and inhibitions, as the use of violence is an end in itself. Intimidation tactics, like decapitation, began as a brutal form of str[14]ategic communication. However, these methods became so widely used that they have lost most of their value as messages and became almost routine. Indeed, the brutality of murders has increased exponentially, with simple gunshot assassinations being replaced by beheadings and more recently killings performed with extreme torture followed by body dismemberments. This could be explained partially by concerns that, due to desensitization, the attacks have to be bigger or gorier to have the same impact, intimidating rivals and the public alike. Yet there is far less care in the use of violence as the number of family members and innocent bystanders being killed seems to have increased. As Williams points out, this suggests that violence has become a “form of contagion,” increasingly used in careless and callous ways and sometimes almost as an end in itself.

This category is problematic because virtually all organizations have participated in it. From the 16 people that were burned to death recently in Sinaloa,[15] to the 72 death migrants murdered in Tamaulipas by the Zeta organization,[16] to the 14 teenagers killed in Ciudad Juarez to comply with an order given by “El Diego” (although they were not involved in organized crime),[17] the detention of “El Ponchis” a 14 year old teenager who beheaded at least four people and who was a member of a teenage death squad that worked for the South Pacific organization,[18] and the killing and beheadings ordered by La Familia Michoacana operatives to test and train recruits during initiation.[19] These examples show a degradation process whereby criminals kill for the profit they will continue to make from defending their territories from foes, whether it is the payment they receive for killing someone or what appears to be a developed taste for brutal murders.

The following table provides a summary of the framework proposed by Williams, as well as some of the examples previously mentioned. 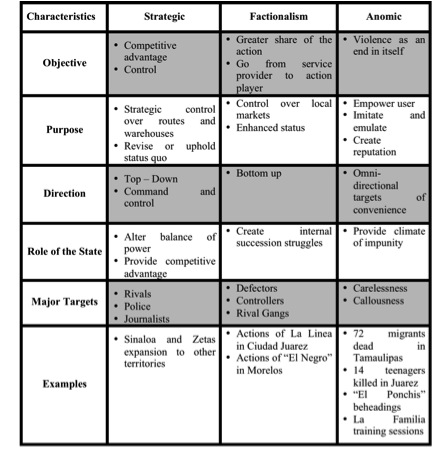 Now that an overview of organized crime in Mexico and the theoretical framework to analyze the violence it has generated have been explained, the third and last section of the serial will set forth suggestions to apply the Ps to reduce violence levels in Mexico. Additionally, some expected initial outcomes will be offered to evaluate if the violence reduction strategy is achieving the expected outcomes.

[4] Plazas are Territories, which could range from a whole state, city or town, in which a criminal group has control over every aspect of the criminal activity (drug sales, car theft, piracy sales, extortion and kidnapping) by intimidation and extreme violence.

[9] Although this could be considered a terrorist action, it is important to note that it was not performed for ideological purposes. It was, rather, a deterrent for the Federal Police law enforcement actions in Ciudad Juarez.

Guillermo Vazquez del Mercado Almada has a Masters in Public Policy and Management with a specialization in security studies from the University of Pittsburgh. He has been advisor of Public Safety at the National Security Council at the Office of the President of Mexico.  Recently, at the Mathew Ridgway Center, he participated in a joint research project with the University of Maryland regarding the nexus between organized and transnational crime and smuggling.