Transcripts of a prison interview of ‘Daniel’ conducted by Voeten and Engels, two Dutch documentary filmmakers—one of whom is a cultural anthropologist who recently completed his PhD focusing on the Mexican drug war, at VISITA CERESO CD, Ciudad Juárez, October 2016. It is an excerpt from the PhD thesis by Teun Voeten, titled: The Mexican Drug Violence: Hybrid Warfare, Predatory Capitalism and the Logic of Cruelty. 276-279. See also: Maaike Engels and Teun Voeten, Sacrifice. Belgian Canvas TV, 2017. 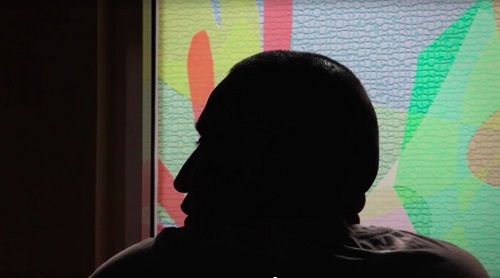 Daniel is a 39-year-old man doing a 30-year sentence for a multiple homicide he committed in 2010. He killed five members of a family, a father and his four children with an AK-47. According to a newspaper clips, thirty-four empty shells were found at the crime scene. The mother and wife of the victims was the sole survivor and testified against him. Daniel is still tortured by guilt and he hopes the woman will forgive him at some point. Daniel has a wife and two daughters, born in 1996 and 2004, ages twenty and twelve.

Daniel was born in Mexico but grew up in El Paso. His mother left the family when he was three years old, and he hardly remembers her. His father was a carpenter and made US$ 200 a week, which was hardly enough to live on since the rent was US$ 400. At age ten, Daniel starts to deal weed, cocaine, and pastilles (pills) in El Segundo Barrio, the predominantly Mexican quarter in town, close to the border. He is making US$ 400 a week and gives a substantial part of his criminal income to his father to help him out. At one point, friends from his father tell him how his son is earning his money. His father becomes livid and hits him with a belt. Daniel stops for a while but resumes soon thereafter when his father falls ill with leukemia. At age fifty, Daniel explains, his father was in weak health. His father realizes where the money is from, but now stops asking questions. Daniel progresses in his criminal career, commits assaults, robberies, and thefts, mostly of television sets. At age seventeen, in 1994, he is arrested with two ounces of cocaine. Since he is nearly of legal age, he is given less mercy and is convicted to a year and a half in the county jail of El Paso. He describes this as very hard times. Phone calls are expensive, and he can only talk to his father once a week. At one point, he does not see his father for eight months.

In prison, he learns many new criminal tricks, for example how to rob banks and how to make fraudulent checks. Once out, he tries to maintain a low profile and works at a job offered by friends of his father. Also, he has saved money from his criminal life before. At age nineteen, his girlfriend gets pregnant and Daniel starts a family. He resumes selling drugs to pay the bills and eventually, thanks to his contacts he has made in jail, progresses to driving cars loaded with drugs from El Paso to Juárez from which he makes US$ 2,000 to $4,000 a run.

Between 1996 and 2001, he continues his criminal career. As he says himself, ‘I originally just wanted to help my dad’, but he becomes accustomed to the easy money. He is arrested seven or eight times and spends short stints - five, six, nine months - in prison. In 2001, he is caught with fifty pounds of marihuana and is sent to two years in jail. In 2003, he is deported to Mexico, but he is back in a few hours. He starts an honest life and works as a carpenter. In 2003, during a random police check, they find out he is illegally in the United States. He gets a very harsh sentence of fifty-six months for illegal entry. After his release in 2008, he is deported to Juárez. Finding a job there is hard; with his tattoos, no maquiladora will employ him. The drug war is full on and Daniel takes up his criminal life. ‘To earn respect, you had to be violent’, he says. His family stays in El Paso, for security reasons he does not want them in Juárez. As Daniel says: ‘It was a war zone over here. I don’t know if you heard but they were practically comparing this to the war in Iraq. ‘There were killings every day, or you know, people exchanging gunfire.’ It was hard to survive; Daniel gets involved with a cartel. He does not want to give details. Even now in jail, the cartels wage power over their members. Convicts from competing crime groups are kept separated. ‘There are things you can talk about and things you cannot’, he comments.

He commits his multiple murder in Juárez. He receives orders to shoot a family of five. ‘There were other people. People that, you know, they go around, make sure, check that there are no police involved, no federals involved. I was nervous. It was my first time. But at the same time, if you don’t obey an order that they gave you... it could be you... in the same position that those people they sent you to kill.’ Actually, he doesn’t know why he had to kill the family and who they were. Daniel comments: ‘Reasons, that... we don’t ask why... it’s like they prepare for war and we are getting ready for war... The thing is, we don’t ask... It is like soldiers’, Daniel explains. ‘Why are they going to war? They just obey orders... In a war, you just have to kill as much people possible from the other side.’

Daniel was afraid to commit the murder. ‘Afraid how I was gonna react... afraid... that I would practically stand there and freeze.’ Apart from fearing he could not carry out his mission, he was also afraid that he would be killed himself. After he succeeded, he was actually relieved: ‘After I saw the dead bodies, it sounds sad or morbid to say so. But I felt happy. I accomplished a mission that they gave me. And that the things did not turn out bad. You know, things were going through my mind... what if these people respond back to me... If I miss, or if I left someone alive and stuff. That can bring consequences... towards me... At that moment I was glad and happy.’

Daniel says he still cannot live with his feelings of guilt. Feelings of empathy are no stranger to him, as he puts himself in the position of the sole survivor, the mother and wife, and prays for forgiveness every night. When his daughter finds out, she gets very angry with him. He understood her anger. In prison, he discusses a lot with inmates the feeling of guilt and how they have learned to cope with it. His daughter is studying, and he sincerely hopes she will succeed in starting a normal life.

A year later, in 2017, Daniel talked again about the murder. Now he says he does not feel sorry for the people he killed. They were not innocent but involved in criminal activities. He says he could even understand himself if his children were to be killed if they were involved in the underground.