“Dog Company: A True Story of American Soldiers Abandoned by Their High Command” 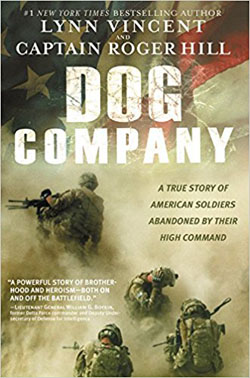 “The Army Does Not Want You to Read This Book.” From the back cover of Dog Company: A True Story of American Soldiers Abandoned by Their High Command by Lynn Vincent and Roger Hill. With all the redactions throughout the book, the statement appears to be true, though those who have served in the military can probably make sense of the redactions to understand what the government obfuscates.

I’ll admit that the back cover wasn’t the first thing that attracted me to this non-fiction book – it was the front cover and then thumbing through the book, noticing the redactions. Also, the 101st Airborne holds a special place with me: an uncle was a paratrooper in the division in the late-1950s; the 101st departed I Corps, in Vietnam, while I remained in 1972; and a nephew served in the 101st in Afghanistan for a couple of tours.

The chapters of the book are short and sometimes preceded by a page of typed, under oath, testimony of those connected with the government’s case – a unique way of capturing the reader’s attention. The authors bring Dog Company’s patrols and actions to life, highlighting its personnel under fire and the interdependence of the men forged together in combat.

The Army Intelligence unit I was assigned to in Vietnam also had a Counterintelligence (CI) section that operated in much the same fashion as the one that assisted Dog Company. This is where the similarity ends, however. It seems that there is (was) a 96-hour hold allowed for detaining Afghan infiltrators and spies, after which time they had to be charged or released by U.S. forces. This became the crux of the book because of what happened as a result.

Being unable to completely depend on Afghan (and Iraqi) forces and governments is reminiscent of Vietnam, as well. It seems that all of these countries had problems with information and intelligence – it often found its way into enemy hands.

Dog Company had recurring problems receiving basic supplies, which were bad enough, but water, men, and ammo? These are the issues that the Criminal Investigation Division should have investigated. But the CID also wore “the same patch” and were likely to “look for the answers they think their boss wants them to find.”

The CI folks and Dog Company had found a number of spies in its midst, but the higher commands did nothing - despite Dog Company’s knowledge of a forthcoming attack and the sure knowledge that these turncoats knew what was coming.

It was depressing to read that the Army has become so very legalistic in all they do – to the point that they end up risking the lives of the very soldiers that are expected to carry out their missions. When a company commander must ignore rules that put his men in jeopardy and is charged in doing so, then something is terribly wrong. Choosing what is right, but supposedly legally wrong, brought an Article 32 hearing and, because it was important to defend the indefensible and not wanting any bad publicity for a war that has no winning strategy, a choice had to be made. Unfortunately for Dog Company’s (West Point-trained) commander, he wasn’t senior enough to just retire and many of his men were subject to various other forms of discipline.

I am glad that I missed the new “wired-Army,” where emails of every sort and various command echelons can harass you or ignore you, as well. The contrast between the front and the rear areas (where wearing a reflective belt and saluting were normal) are also reminiscent of days past and remembered.

Veterans reading through Dog Company will notice that “Command Time” has remained a truism in the Army (despite the years), that a fear of the press dictates a response (either good or bad, but either way someone will pay for it) and that a JAG (in person or in the “rules” they create) seems likely to become the real commander at each and every echelon.

Dog Company is very much worth reading and you’ll quickly turn the pages with almost a foreboding of what is to come.