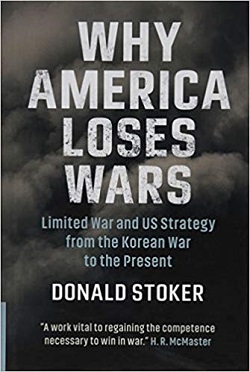 In Why American Loses Wars, Professor Donald Stoker, Fulbright Scholar and academic, persuasively argues warfare has changed over the last 75 years and the United States no longer knows how to approach war correctly. As a country, our over reliance on limited war and a failure to adequately conclude with them has left us incapable of winning, forever mired in endless wars. Why American Loses Wars serves as a warning to U.S. leaders on the pitfalls of failing to approach war with a strategic vision, but does so in a hard to follow academically based comprehensive analysis. Stoker’s fills his work with recommendations on new ways to think about limited war and an overabundance of examples of failure, but does not show the reader how to implement these ideas in meaningful ways outside an academic environment. But his work will begin the conversation on challenging our current approach to limited war strategy.

Serving as a visiting professor at the Diplomatic Academy in Vienna and having spent 18-years as the Naval Postgraduate School in Monterrey, California, Professor Stoker is well suited to make his case. He has taught and written extensively on strategy, and his previous work Clausewitz: His Life and Work resides on the British Army’s professional reading list. Stoker is an academic with a strong list of credentials, and he aims his work at a serious student of military strategy or a policymaker/ practitioner crafting America’s next foray into conflict.

Stoker spends considerable time in Why American Loses Wars testing and critiquing the current concept of limited war theory against his ideas. He laments that how “we write and think about limited war intertwines all US thinking about war… is so broken and illogical that it has poisoned the US ability to fight any war.” Stoker bases much of his book on the belief that our current strategy issues on approaching war stem from a lack of a coherent definition of limited war. Contemporary theorists generally agree that limited war requires limiting political objectives and a limiting of means to achieve those objectives. Agreement between limited war theorists seems to end there however, and Stoker describes himself as a believer that ends based objectives far outweigh a means-based approach to strategy. Stoker writes that the definitions of limited war he’s encountered involve some, all, or none of the following elements:

Limiting the objectives (what is meant by this is rarely defined), limiting the means, the prevention of escalation (particularly into so-called “total wars”); constraints of violence, non-use of nuclear weapons (usually), geographic limits, and the awareness of limits on the other side.

Stoker is critical of almost all previous limited war strategists, but none more so than Bernard Brodie and singles out his definition (part 3, p. 309) of limited war as failing to “provide a coherent definition.”  Brodie based his definition on the factors used to wage war (means based) and not on the objectives being sought (ends based). Stoker argues that defining war based on the means used (or not) lacks universality and concreteness. Since Brodie’s theory has become the panacea that is applied to all wars that are not WWII, its means based approach has pervaded practitioners and policymakers and drawn them away from attempting to win wars. If our strategy is not to win a war, Stoker argues, then it probably isn’t about ending the war either.

The greatest strength of Why America Loses Wars is not the definitional morass (into which Stoker wades through) for the reader. Rather, it is the middle of his work where Stoker goes into immense detail outlining his new strategy for limited war. He carefully reveals constraints the policymaker may face, how to think about strategy, and why ending war can be so challenging. Interspersed throughout are easy to follow guidelines, such as three key questions that anyone ending a war should keep in mind: (1) What is being sought politically? (2) How far must or should one go militarily to achieve this? (3) Who will maintain the peace settlement, and how?  Stoker uses the major conflicts after WWII: Korea, Vietnam, Desert Storm, and the current fights in the Middle East to help explain his maxims and present wartime examples. Notably though, his multiple examples throughout the book border on clouding out his ideas and leaves the reader wondering if they can implement these ideas outside of an academic environment.

Why America Loses Wars is not without faults, however. Stoker overlooks inconvenient studies in which the US achieved its aims in limited war, instead focusing only on wartime major failures. By looking past conflicts in Grenada, Panama, Bosnia, and Kosovo, he misses a unique opportunity to show the reader examples of successful US limited wars. The work needs a critical examination of how the US successfully used policy to wage limited war. Had Stoker included these in his work he would have presented a more complete analysis to the reader, moving his recommendations from the theoretical to the more concrete, and lent his work historical credence that it is missing.

Stokers Why America Loses Wars is an ambitious book that does a superb job of serving as a starting point to a sorely needed conversation on current limited war strategy. Reading it should hopefully spark conversation among policymakers and strategy practitioners on how to approach Americas future wars. Ultimately though, Stokers work falls short of truly offering the practitioner or policymaker an understanding of how to implement his limited war ideas. Missing from Why America Loses Wars is examples of how limited war strategy was successfully used in any previous conflicts since WWII. His work falls short of giving the reader a quality contrast between success and failure and any lessons that could be learned. Why America Loses Wars is heavy on theory and lite on practice. Stoker never breaks his work from its academic background, leaving the reader to wonder if its ideas could be executed outside the classroom.

Travis Zahnow is an active-duty U.S. Army Armor officer. Travis previously served as a Cavalry Troop Commander and as a Cavalry Platoon leader. Travis is a graduate of the United States Military Academy at West Point and is currently a student at the Johns Hopkins School of Advanced International Studies (SAIS). He is a recipient of the Armor and Cavalry Leadership Award. These views are those of the author and do not reflect the official position of the United States Military Academy, Johns Hopkins SAIS, the Department of the Army, or the Department of Defense.