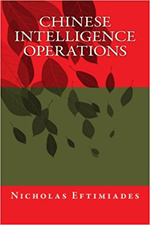 In his book, Chinese Intelligence Operations, Nicholas Eftimiades states that the “lucrative field of espionage…is highly suited to the [People’s Republic of China] PRC” (Eftimiades, LOC 1585). Eftimiades’ assertions were developed in 1994 and have continually been proven true in the twenty-two years since he wrote the book. The PRC is highly suited for cyber intelligence operations because of the type of information about which the PRC deems necessary to maintain its position as a regional power, and the use of non-intelligence experts in positions of importance all over the world.

Eftimiades makes it evident that China “has little to gain from intense espionage and analysis activities directed at global political-military alliances outside its region of influence” (Eftimiades LOC 311), and that their “perception of internal and external threats dictates the information requirements levied on its intelligence services” (Eftimiades LOC 311). China does not have a worldwide military which means it has “less interest in the global political military environment” (Eftimiades, LOC 324) than other nations, but that doesn’t mean China isn’t interested in worldwide intelligence operations. Instead of intelligence geared towards worldwide global-political information:

Intelligence that pursues high technology, foreign policy trends, and dissident groups in the twenty-first century requires the ability to monitor multiple state and non-state actors in various parts of the world. Before the proliferation of networked systems this task would (and did) have required countless man-hours and vast amounts of human intelligence, but the ability to monitor these types of actors in disparate parts of the world from a command center actually makes intelligence-gathering easier for the Chinese. Dissidents that had previously been disconnected are now linking up on the internet and thus creates a central place for the Chinese to monitor their communications, networked systems create a platform on which the Chinese can monitor issues related to foreign policy and trade, and digital and cloud storage means that sensitive technology information is potentially more accessible than it had ever been in the past in physical form. The areas around which Chinese intelligence focuses have made the internet the perfect complement to Chinese intelligence-gathering methods.

One of China’s methods of intelligence gathering is to use non-intelligence assets to collect information. The Ministry of State Security (MSS) “co-opts vast numbers of Chinese citizens living or traveling overseas” (Eftimiades, LOC 516) to include the “services of 1,500 Chinese diplomats and commercial representatives” (Eftimiades, LOC 521). Eftimiades makes a point to mention that “most Chinese clandestine collection activities are not sophisticated operations, but their numbers compensate for their weakness” (Eftimiades, LOC 521). At the time the book was written (1994), the Chinese had 70 PRC establishments and offices, 15,000 Chinese students arriving annually, 10,000 representatives travelling in 2,700 delegations each year, and a large ethnic Chinese community from which it could conscript espionage services (Eftimiades, LOC 523). The ability of the Chinese to take advantage of diaspora, and diplomatic ties through the use of nationalism and intimidation creates a large number of threat actors:

The MSS uses two main themes in recruiting foreign nationals of Chinese ancestry. First, it appeals to their perceived obligation to help the land of their heritage, thereby exploiting sentimental feelings of ethnic pride. Second, it implies that family members still in the PRC will receive unfavorable treatment unless the subjects cooperate (Eftimiades  LOC 1142)

The ability to have human intelligence assets on the ground in multiple international locations strengthens the case that the PRC is suited for cyber operations. Though human intelligence has changed with the advent of the internet, it is by no means obsolete. Using human intelligence assets to verify information, befriend a person of interest, and to observe other people helps to augment digital information. There is also some information that might not be digitally available, like technological information that is still being researched or worked on from scholars in the field (“China’s most productive method of legally acquiring foreign technology is to send scientists overseas on scholarly exchange programs (Eftimiades, LOC 542):

Another method used to acquire technological information is to invite foreign experts to China. Under the guise of academic institutions, COSTIND invites noted scientists and academics to lecture at Chinese universities. This method of exploiting visiting scholars is a time-honored practice of the MSS and the Second Department Generally, COSTIND covers all expenses for visiting scientists and their families. After the scheduled classroom lectures, “special sessions” are held for the commission’s experts. (Eftimiades, LOC 1962).

The ability to personally interact with scientists in the high technology field was a major source of information in 1994, but now it affords the Chinese the ability to implement digital tracking mechanisms on these scholars to follow their work long after the conference. The Chinese pay for the rooms of these scholars which means they can control their environment, they know when they are going to speak, and they would also have continued digital correspondence. Inviting experts to a conference creates an exponential number of threat vectors for the scientists where the Chinese can implement some type of digital surveillance to continually ensure that they receive up-to-date information on technology from the leading experts in the field.

The internet and the ubiquity of networked systems has made intelligence gathering easier for the Chinese, mostly because the inclusion of digital espionage fits so smoothly into their intelligence-gathering model. Their interest in technology, foreign policy, and political dissidents used to require a large number of human assets (for monitoring, recording, and reporting), but much of that information can now be accessed digitally thus not requiring as many human assets. The sheer number of human assets is no longer required to conduct routine surveillance which means the Chinese can better develop quality diplomatic and ethnic-Chinese to corroborate digital information and surveil important personnel to look for their digital weaknesses (among other things). The PRC is perfectly suited for internet surveillance, which has made them more dangerous on an international scale because it can repurpose many of its previously-used human assets to augment its now-primary digital surveillance/espionage activities.

This book is both dated and…

This book is both dated and for a niche audience. Much of the content has been overcome by events since it's publication 20 years ago, and not many people look for this topic. But if you need help writing a paper and want to get a general, very basic, overall feel for Chinese intelligence operations then this book will serve that purpose. I put the word "book" in quotes in my review title because honestly this is on par with theses written by military school students.