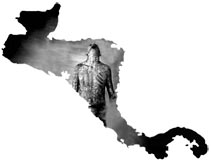 On 23 October 2015, a conference on Gangs & Drug Trafficking in Central America was held in Pittsburgh, PA. This important event was coordinated by the Matthew B. Ridgway Center for International Security Studies and the Center for Latin American Studies (CLAS) at the University of Pittsburgh with sponsorship from the Graduate School of Public and International Affairs (GSPIA) and University Center for International Studies (UCIS). Forty-five participants, primarily from academia, policy, military, and governmental entities, attended the conference. The conference background and topic summary were as follows:

In the summer of 2014, the flow of undocumented migrants from Central America to the United States turned into a torrent, with unaccompanied minors making up a particularly significant percentage of the persons seeking entry. As well as the traditional pull factor of economic opportunity, the unaccompanied minors were also responding to a powerful push factor—the widespread violence in Guatemala, El Salvador and Honduras. Large gangs known as Maras, especially MS-13 and Barrio 18, were the main source of the violence. Indeed, there were at least three different components of violence: open warfare between the two major gangs, a recruitment process that involved high levels of coercion and violence, and a resource generation strategy centered on extortion and intimidation. Ironically, incarcerated gang members used cell phones to extort business, especially those in the transportation sector.

Other violence stemmed from the competition for control of cocaine trafficking routes through the northern triangle and Mexico. As a result, the countries in the Northern Triangle of Central America have some of the highest homicide rates in the world. Against this  background… specialists from the United States and Central America itself to examine the gang phenomenon, the nature of drug trafficking through the region, and the nature of governance in the Northern Triangle.

The conference was divided into panels focusing on: 1. Governance in the Northern Triangle, 2. The Gangs, 3. Cities, Prisons and Politics, and 4. Roundtable: What Can Be Done? Presentation topical areas were “Political Dynamics in the Northern Triangle,” “The Crisis of Governance and Dangerous Spaces,” “Has Guatemala’s Long-Awaited Spring Finally Arrived,” “The Political Nature of Gangs,” “Third Generation Gangs,” “Gangs as Transnational Criminal Organizations,” “Gangs and Prisons in El Salvador: Violence and Confrontation,” “Prison Violence and Gangs: The Impact of Crime Control Policies in Honduras,” and “Malicious Peace: National Level Gang Truces.”

Dominant themes expressed and lessons learned from the conference presentations are as follows:

• Central American countries experienced shared history, policies, and economic changes during conquest and colonization that left them similarly underdeveloped, dependent on commodity imports and exports, and undemocratic (except for Costa Rica). Resulting civil wars in the 1980s caused millions to migrate to the U.S. from poorer and more violent El Salvador, Honduras, and Guatemala. Peace and formal democracy emerged in the 1990s, but repatriated criminals formed street gangs in the northern countries and Mexican narco-traffickers shifted operations to Northern Central America. Combined, these external forces and poverty generated crime waves and corruption that bred renewed flight from the region to the U.S. Weak governments and divided elites respond and ineffectively to the crises, while citizens’ support systems and democratic norms declined.

• The Northern Central American (NCA) countries have weaker economies and institutions and more politically divided elites than the Southern Central American (SCA) countries. The NCA countries have also proven more vulnerable to internationally originated crime from gangs and narco traffickers than SCA counties while, at the same time, their democratic norms are eroding. This is likely due to organized crime’s effects on weakening state systems that may ultimately result in reform—such as in Guatemala—but could just as well be a harbinger of deeper turmoil and democratic reversal as was the case with the 2009 Honduras coup.

• It is important to remember that gangs are partially jail based organizations that thrive and grow stronger in jail.  Hence, time in prison is not a dissuasive factor for gang members to disengage from their illegal activities. From March 2012 through June 2013 a gang truce was arranged with the intermediation of El Salvador's Government, the Catholic Church, and a ONG (Organización No Gubernamental)  mediator. This truce failed after the money needed for the implementation of designated municipalities to become “sanctuaries” didn’t materialize, the gangs did not stop their extortion activities, and the truce was rejected by a substantial portion of the El Salvadoran population.

• From the time the gang truce in El Salvador ended, the gangs have initiated what can be called a “Dialogue of Death” to pressure the government to revive the truce and return the privileges that had been granted to them. As a result, the gangs have increased their levels of violence with this purpose in mind. In addition, they have recently decided to directly challenge state authority by means of the targeted killings of judges, prosecutors, policemen, and members of the armed forces. During 2015, the gangs have engaged in more than 400 shootings with the police and have even detonated a car bomb. In response, the El Salvadoran government has changed the laws so that policemen and soldiers that kill gang members during shootouts with them do not have to go into preventive custody pending the outcome of a shooting review. Further, the Constitutional Chamber of the Supreme Court has now ruled that gangs are “terrorist organizations” and that any form of accommodation between the government and the gangs is now unconstitutional.

• The Honduran government’s hard line ‘security’ policies focusing on the prison system have resulted in the prisons becoming one of the main areas of violence in that country. As a result, the power relations within the prisons themselves are changing. Since all Honduran prisons are self-governed by the inmates, when challenges to the current power structure arise— usually by gang members who confront the existing regime and seek to take over control of prison resources—many forms of prison violence and riots have resulted. While security policies are not new in Honduras—they have been present since the Cold War era—the notion of security itself has changed.  Today, concerns over insecurity are linked to threats from anyone, as contemporary security policies are now connected to global policies of crime control, which criminalise unemployable young adults from social and economic disadvantaged backgrounds.

• The Third Generation Gangs (3GEN Gangs) model, dating from 1997, traces the evolution of gangs from turf through drug to mercenary/politicized forms and is well suited to understanding the emergence and activities of Mara Salvatrucha (MS-13), Barrio 18, and the other maras found in Central America.  One of the concerns related to the 3GEN Gangs model is the rise of third generation gangs that can politically challenge sovereign states. Further, while gangs are increasingly viewed as products of deviant and dark forms of globalization and as drawing strength from various sectors of the illicit economy, it is now considered that they also represent a ‘feedback generator’ of sovereign state environmental toxicity. Hence, they readily engage in environmental modification of the socio-cultural terrain within which they exist by means of taking over public spaces and in the re-socialization of children living in areas under their control to gang values.

• The gangs in El Salvador, while retaining enormous firepower and territorial control, are in relative disarray and face a host of challenges from the traditional “transportista” networks as they fight to control transit routes, the police and military, and other gangs. This will likely mean a sustained period of relative chaos in El Salvador. With this in mind, Mara Salvatrucha (MS 13) in San Pedro Sula is showing new political awareness and sophistication, offering social services and small programs to the communities they control, perhaps becoming the first of the 5th Generation gangs, using something other than terror to control/win the population. Presently, no government in the Northern Triangle has shown any ability or political will to reverse the gains the gangs are making in entering the cocaine transport business, killing for hire, and engaging in territorial control.

• Gang truces emerged in four countries— El Salvador, Belize, Trinidad, and Tobago —while one country, Guatemala, flirted with the idea. In studying these cases, a noticeable pattern to them can be discerned.  The possibilities for gang truces arise: a) when violence appears to be breaking its normal boundaries, b) after the government of a fragile state has tried suppression activities, c) near a scheduled national election, and d) if core gang interests are unchallenged by government. However, such truces are not without costs to societies. There are trade-offs that include the perspective that governments are protecting criminals rather than law-abiding citizens. In many people’s eyes, the government is rewarding criminal behavior. Truces are also not long-term solutions to solving the underlying reasons that gangs are a problem in these societies. They may simply be short-term pauses in violence. In fact, of the four gang truces that were implemented, all failed and Guatemala did not move forward with truce overtures.

• Despite the advances made in the struggle against corruption by the United Nations-mandated Comisión Internacional Contra la Impunidad en Guatemala (CICIG) and Guatemala's Ministerio Público—most notably the jailing of then-President Otto Pérez Molina and former Vice President Roxana Baldetti earlier this year, Guatemalan politics remains in large part organically corrupt and linked to organized crime. The election of former comedian Jimmy Morales as the candidate of the Frente de Convergencia Nacional (FCN), a party founded by former military officers leaning to the extreme right of the country’s military spectrum, does not change this situation and there will likely be further protests and unrest in Guatemala in 2016.

• The “maras problem” in the Northern Triangle of Central America is a symptom of an underlying crisis of governance.  States in the region are weak and do little to meet the needs and demands of their citizens.  As an outcome, the maras provide a sense of identity that substitutes for both family and state affinity and attachments. Although the gangs do not provide the same kind or level of alternative governance that the transportista organizations have sometimes done, they do provide some order.  However, they also generate considerable violence particularly where they are competing for control of particular areas in cities or even prisons. Violence is also directed at ordinary citizens (especially bus drivers) who are the targets of extortion. In terms of governmental responses, it is clear that repressive policies have failed.  Consequently, governments should consider trying to mobilize and harness the entrepreneurial energies of the gangs and nudge them into more legitimate and productive activities.

The roundtable policy suggestions that were discussed at the end of the conference included enfranchising marginalized communities, addressing state corruption issues, re-socializing gang members and looking for legitimate economic employment opportunities for them, de-criminalizing some forms of narcotics to undermine the profit revenues of illicit organizations, and considering power sharing strategies with non-state actors in those areas which have fractured sovereignty and loss of state control.  For more information concerning this event, see the conference website or contact Sandra Monteverde, University of Pittsburgh.

The views expressed in this conference report are those of the author and do not necessarily reflect the official policy or position of the Federal Bureau of Investigation, Department of Justice, Department of the Army, the Department of Defense, or the U.S. Government.