Beware the Limits of Hard Power in 2017

Beware the Limits of Hard Power in 2017 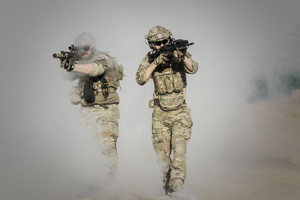 In the first four months of 2017, the use and threat of American military force (hard power) has substantially increased, while diplomatic and socioeconomic efforts (soft power) have been notably marginalized, with little concern for the appropriate mix of the two (smart power).  Under the Trump Administration, this reliance upon hard power can be seen in his generally aggressive rhetoric; his budget proposal that provides increased funding to the Department of Defense while severely decreasing funding for the Department of State and related efforts; his positioning of top military leaders in non-military, civilian leadership positions; his framing of the evolving situations in North Korea and Iran; his willingness to grant more autonomy to the military in their overseas operations; his interest in using the military to disrupt and prevent terrorism; and recent developments in Syria, Iraq, Afghanistan, and elsewhere.  Quite simply, President Trump seems to hold the view that most of the problems of the United States can be solved through military power, even when other courses of action may produce improved outcomes.

This is not to say that the military doesn’t have a role in the world affairs of the United States, as power projection is a central tenet of the American reputation.  In this modern era, the military continually ensures that the country is safe from attack and invasion, but also has developed serious roles in counterterrorism, disaster relief, humanitarian interventions, and the general safeguarding of domestic interests in the foreign theatre.  However, the limits of hard power must be remembered, in order to avoid repeating the mistakes of the past.

Hard power won both World War I and World War II, but not without the assistance of some actions that would now be considered soft power.  However, hard power struggled to produce the desired outcome in the Korean War, ultimately failed in the Vietnam War, and has only seen any recent success in the Gulf War, as the wars in Afghanistan and Iraq continue to struggle toward success.  During the Cold War, the use of hard power was ultimately limited -- and absolutely avoided, when direct conflict between the Soviet Union and the United States was possible -- in favor of soft power and dramatic threats to use hard power.  This half-century recognition that military engagements could not resolve all of the external problems and concerns of the United States was an important shift.

Presently, the United States faces a number of direct and indirect threats to its interests, including attacks from other countries, attacks from terrorists and other non-state actors, attacks on American people and goods abroad, the destabilization of the European Union, a resurgent Russia, a rising China, failed and failing states, and, of course, anti-democratic extremism found in seemingly endless varieties.  Hard power cannot, however, address all of these issues.  How does a military force successfully combat a stateless, shifting terror network?  How would a military engagement with either Russia or China not further escalate conflict into war both terrifying and absolute?  How can the military assist with the socioeconomic unrest found in Europe?  How does the invasion of a failed or failing state help to re-establish legitimate government?  How would an aggressively defiant, irrational, and dangerous North Korea respond to a military engagement of any kind?

Even if the military could be used to address the myriad concerns of the United States, which it quite clearly cannot, American experience since the end of World War II provides numerous examples of why it should not.  First, and most direct, the deployment of military forces to a foreign theatre without proper preparations or a clearly identified mission can be inefficient, costly, and dangerous, producing none of the desired goals.  Second, rapid escalation -- both within the target itself and with its allied states or people --  is always a very serious concern.  Third, the American military -- and, arguably, any foreign military force -- remains ill-suited to properly engage with a fully developed insurgency or in a complex, guerilla-style civil war.  Fourth, the cost of any military deployment -- in terms of blood, treasure, and time -- may very well exceed the benefits of any outcomes achieved.

Instead of relying so heavily upon the use and threat of hard power, soft power should be employed, where possible.  Through diplomacy -- both formal and informal -- and the careful manipulation of socioeconomic factors, the United States and its allies may better address some of these concerns.  Partnership and collaboration, rather than threats, may produce favorable outcomes with various states and peoples.  Leading by example, rather than by demand, may increase an overall interest in the socioeconomic wellbeing of the West and the return of a desire to replicate it.  Decreasing the number of stated enemies through carefully negotiated agreements and plans of action, rather than perpetually creating new enemies, would clearly be beneficial.  Seeking to minimize some of the socioeconomic factors that appear to be directly correlated with some forms of terrorism and extremism, rather than exacerbate them, should see favorable results.  Supporting global self-governance and self-rule, rather than Western-style democracy, would permit various peoples to live peacefully as they collectively desire and better join the international community.

None of this can be achieved, however, if the U.S. Department of Defense is to be the primary face of American interests worldwide.  Although the American military should absolutely continue its necessary engagements -- both now and in the future -- and employ varying levels of force to achieve their missions, the military cannot also engage in the building of alliances, governments, nations, democracy, or socioeconomic stability.  As the rhetoric rises against various aggressors, the Trump Administration must remember that the U.S. Department of State serves a very vital purpose:  helping to mitigate wars of necessity and prevent wars of choice.  If the American soft power community is properly funded, fully trusted, and allowed to undertake its important work, the constant threat of war and the cultivation of foreign fear will no longer be necessary.

Any opinions expressed are directly and expressly the author's own; they do not represent -- unless stated -- his employers (past, present, or future) or associated/affiliated institutions.

Kyle R. Brady (website) is a security-oriented academic with a primary interest in contextualizing security concerns, which he currently explores as a postgraduate student at King’s College London in the Department of War Studies.  He also holds a Masters in Homeland Security from Pennsylvania State University with foci on terrorism, public administration, and emergency management, as well as a Bachelors in Political Science from San Jose State University with interests in international relations and political theory.

What are the "ends" that our hard, soft and/or smart power seeks to achieve?

Certainly this cannot be only decapitation of insurgencies or regimes.

And certainly this cannot be only to control territory and populations.

What is/are the "better peace" criteria that form the basis for our engagements overall -- and, accordingly, for our use of such things as hard, soft power and/or smart power to achieve such ends?

The last sentence in this opinion piece is laughable. While we should clearly be aware of the limits of hard power, we should also be aware of the limits of wishful thinking. The author seems to confuse left leaning media reporting (or myth making), who are vehemently anti Trump, that the U.S. no longer leverages diplomacy. That is a false assumption, and in fact many countries are championing Trump's approach to diplomacy as a welcome change to the so called era of smart power, which was little more than an excuse not to act in a decisive manner on the world stage, and then disguise this inaction as some form of smart power. Smart compared to what? Has the U.S. every employed dumb power? Of course we have made mistakes invading Iraq in 2003 for example, but overall, and throughout history the U.S. employed its elements of national power effectively.

The so called recent emergency of smart power, has resulted in the rise of Al-Qaeda (failure to nip it in bud early in its life cycle), Russia aggression (we gave them freedom of movement by exaggerating the threat of terrorism and taking our eye off the ball), an assertive China that is rapidly displacing U.S. influence in East Asia, an area critical to our national prosperity, and the humanitarian disaster in Syria. Kyle should retitle this piece, "I Like Dreaming." He should also recognize it is a dangerous dream not based on facts.