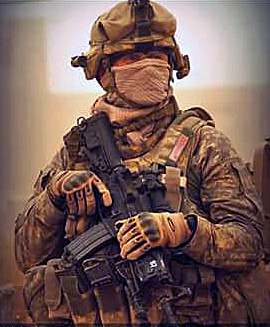 This Sunday the Nation will be transfixed with Super Sunday Super Bowl #50.  Much of the Nation will be collected around the television and for 60 minutes of playing time and an almost equal amount of commercials and halftime, we will revel in the physical grace and athleticism of less than a hundred of our greatest physical specimens.  At the conclusion, one of those players will be awarded the title of Most Valuable Player.  We will all applaud, comment, finish the snacks and drinks and get on with the rest of our lives.  But that will ignore our true Most Valuable Players, those that wear a uniform and perform truly mortally hazardous tasks on our behalf in places not bounded by lines and rules.

They are of several Services but from every place we call home.  But they are not home.  They are on some cold enervating dirt bare hilltop trying to hold dear that which we told them was important.  They operate every aspect of our military machinery and location we claim to be-ship, plane or ground.  They don’t have a name known to us all as those we honor this Sunday but they are intimately familiar to the very small group we would title combat companions.  He or she is not known by many but is recognized by all. They are the citizens that voluntarily gave up their home and nachos and amusing commercials and the thrill of watching the ultimate athleticism to be part of something greater than themselves and to pay back in some small measure what we all enjoy and take for granted.

The contest they have chosen to enter is exhausting at best and mortal at worst.  There will be no trophies for villages cleared, ambushes eliminated or IED’s disarmed.  The act of helping a child, healing a population or saving a companion will reap no reward other than satisfaction and pride in purpose and the bonding of the unit which form the temporary home. For this, they have forsaken all that we hold dear less that of service and dedication. They expose themselves for the benefit of  their companions and do what needs to be done for a cause greater than themselves.  They have no injured reserve list permitting an absence from the tasks. They work in total anonymity from everyone other than their immediate unit and now detached family. There, there is no bench or substitutes-everyone plays all the time and a clock holds no meaning.

The members of the Most Valuable Player list froze at Valley Forge, held at Gettysburg, secured Chateau Thierry, cleared Tarawa, seized Omaha Beach, secured the 38th Parallel and endured the unendurable in Vietnam. They restored democracy to Panama and Grenada, brought the light of liberty to areas of darkness in Kuwait, Afghanistan and Iraq. They are the structure and sinew that binds us as a Nation. They secure our right to be as bad or as good as we may wish. They insure we can sit together in a warm place and for sixty minutes be concerned about nothing more important than a transient athletic contest played by people who will have no earthly effect on our greater well-being. They cemented our creation and preserved our future. They are our Most Valuable Player. When the Super Bowl MVP is announced, pause for a moment and think of someone who chose not to be in the living room this day.

I am not going to argue with you about the nature of the conflicts of Vietnam, Afghanistan nor Iraq. It is clear to almost everyone in hindsight, as well as clear too many in 'Real Time' that all of those conflicts were dreadful wastes of life, money national effort on behalf of the US and similarly a waste of life to those we opposed. However, to those of us who served at any time, the 'Whys' of warfare are above our paygrade and we are only tasked with the 'How'.

Much of what you post as 'publicity' is pure and unadulterated horsechit' and again, I agree with you on that, but that isnt what Col, Nightengale was discussing and a better word is perhaps 'recognition'. The PFCs of the military and more specifically the combat arms are the unsung heroes of each and every conflict that the US has fought, be they good, bad or ugly and we are the ones most likely to end our lives in a cold grave for our troubles. We not only get no recognition for our service, we get damn little pay for what we do and currently ~20% of enlisted soldiers receive some form of food aid or other assistance just to make ends meet. In short, it is not unreasonable for the men and women who bear that burden for our country to get some recognition for our sacrifice, not to be accorded to virtue of a hero (because just wearing a uniform does not confer that accolade), but to be recognized for the important service that falls on fewer and fewer shoulders each year.

I am also insulted by the tone of your other comment and find people like you personally disgusting. Despite my history, I identify as a mostly pacifist 'combat hippy' and deplore the needless loss of life from anyone, friend or foe, from the inhumanity that is war. It is a necessary evil, because inherent in the spirit of mankind is evil, cold, cruel, calculating evil that the US represents all too often to too many people in the world, but that is not the fault of nor the responsibility of the people in uniform who carry our standard into battle. It is the choice of the civilian population who selects our leadership that places us in harms way, far from home and often far from 'right'. You can impugn the tasks that we are given, but to impugn the soldiers who carry out national policy is a gross offense and one you are permitted from all the times we did fight for those rights.

I was a high shcool drop-out when I joined the Army, before getting my GED in Col Nightengale's battalion, 2/505 PIR. While I was there, I dont remember seeing any of those 'Walmart Rejects' you mentioned and havent seen any in my time since. Even here in the 'People's Republic of Vermont', all I have seen among the National Guard infantry formations here are intelligent, capable young men who recognize the risk they are taking through uniformed service, even in the face of sarcastic and ill informed civilians such as yourself. I find it humorous that you would cast such aspersions on a group that you have never been a member of and likely couldnt ever meet up to the standards that such people live their lives by. But much like your words, your contempt is something that is the mere buzzing of flies, an annoyance of a lesser creature that is best ignored.

There is plenty not to like about the military; how we are funded, the conflicts we are tasked to fight and the corruption that the 'Military Industrial Complex' has brought to this country, but there is no cause nor excuse for the contempt in which you hold a group of people that in many (if not all respects) are very much your superior.

Have a great day!

Is your complaint that PFCs (presumably who are not awarded high decorations for bravery) are not well known to the public?

Do you really want the true reasons many privates join advertised. Currently the military goes with the "patriot serving their country" angle. Do you (BTW I do) want "Walmart rejected my application" stories widely publicized.

Maudlin sentimentality about the "troops" is part of selling dubious military adventures. A good example of reality hitting the fantasy of who joins the army is Pat Tillman who was shocked that his fellow soldiers didn't fit the "heroic self-sacrificing" model he expected to find. Of course they were shocked that he'd be stupid enough to join the army and give up million of dollars.

The Zero Publicity comment was specifically addressing individuals, not organizations. While Player X with great direct personal by name publicity gets a new pickup and big check and flies off to the Caribbean to a secluded island-for sake of the discussion-PFC Y sets off in a crystal cold night to hump a ruck several miles and to overwatch a bad guy passage point. He may or may not be killed, wounded or just scared to death feeding scorpions and bad bacilli. No one outside his family or his squad has a clue as to who he is or how he thinks. Yet he chose to do this voluntarily for no reward other than the kinship of his peers.

One can argue about the larger purpose of the National decisions that brought him there but in no way should that detract from his personal qualities or life choices. Through our history, we have had good and bad reasons for PFC Y's presence but we should take a moment to honor the spirit that all those Y's demonstrated. Someday, we may have a conflict that you believe is important and right-you will wish a sufficient number of PFC Y's so you may continue doing what you do.

Thus is what I meant by ahistoric. Exactly what American freedoms were being safe guarded in Vietnam? How about the 2nd Gulf War?

Zero publicity? What were American Sniper? NCIS? Lone Survivor? Top Gun? The list of popular culture celebrating the US military is close to endless. Could anyone even be expected to list the "I was a SEAL" auto-hagiographies that have been published recently?

Just FTR-in no way was I trying to aggrandize myself-I am way too old for that. My point....which apparently was too obscure........was that people who served voluntarily now and those that served before were what made us and kept us and allowed us to enjoy something other than killing each other. We pay huge homage and bucks to transitory athletic stars, celebs and others but ought to take a moment to aggrandize those that get zero publicity, low pay, a chance to be killed and discomforted all so we can enjoy our nachos and halftime. And remember, now they are all volunteers. Consider the likely alternative condition if we had no volunteers but retained the desire to be totally self-serving.

I presume I hurt your feelings by suggesting that "the troops" aren't the poor forgotten souls the author painted. Do you consider yourself one of the MVPs?

Really ... I mean ... really? Your first paragraph is entirely dumb. The second is as fine an example of GED logic I've seen in many a year. The third makes the first look like genius.

The author would be one of his MVPs wouldn't he? Should one write articles describing how great one is? Seems a bit tasteless and of course is ahistoric given the actual facts behind many US military operations and the "threat" to the US.

You won't have to think abstractly about the military during the Super Bowl because I'm sure DOD will have provided color guards and fighter planes for the event. It may have even paid the NFL for the right to attend.

Far from being forgotten the military permeates US life while it sucks huge amounts of taxes away from the people who actually pay for DOD and don't get medals and don't get pensions and don't end up as beltway consultants or DOD contractors.