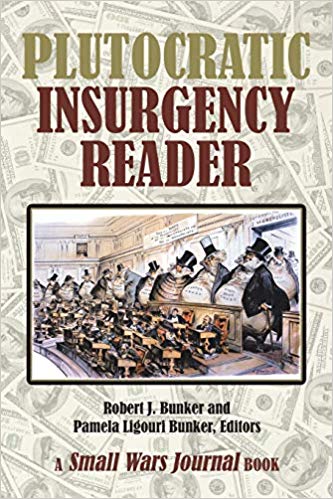 Plutocratic insurgency represents an emerging form of insurgency not seen since the late 19th century Gilded Age. It is being conducted by high net worth globalized elites allowing them to remove themselves from public spaces and obligations—including taxation—and to maximize their ability to generate profits transnationally. It utilizes ‘lawyers & lobbyists’ and corruption, rather than armed struggle—though mercenaries may be employed—to create shadow governance in pursuit of plutocratic policy objectives. Ultimately, this form of insurgency is representative of the challenge of 21st century predatory and sovereign-free capitalism to 20th century state moderated capitalism and its ensuing public welfare programs and middle-class social structures. It can be viewed as a component of ‘Dark Globalization’ that, along with the emergence of criminal insurgency, is now actively threatening the public institutions and citizenry of the Westphalian state form. This important and groundbreaking Small Wars Journal book is composed of over thirty readings by fifteen contributors.

Purchase at Amazon (and support SWJ as well)