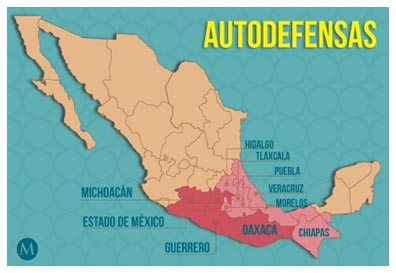 According to the National Human Rights Commission, civil self-defense groups have emerged in 11 of Mexico’s 32 states. Details regarding the states in which these groups are operating are listed below:

•     Michoacan: numerous groups are operational in the state and new groups continue to

•     Guerrero: civil self-defense groups are operational in 46 of Guerrero’s 81

municipalities. In some cases, these groups are supported by the state government.

•     Oaxaca: two known civil self-defense groups are located in the state. The first

operates out of Santos Reyes Nopala and is headed by PRI Mayor Freddy Gil Pineda.

The second operates out of Juchitan de Zaragoza.

Some of the most significant civil self-defense groups currently operational in Mexico are listed below:

•     Organizations of Guerrero Union (UPOEG): has known presence in 21 areas

has known presence in one area

Analysis: The alarm over the rise of the fuerzas autodefensas (self-defense forces) was sounded by George Grayson in the September 2011 Army War College paper Threat Posed by Mounting Vigilantism in Mexico and later echoed by Patricio Asfura-Heim and Ralph Espach in the July-August 2013 Foreign Affairs article “The Rise of Mexico’s Self-Defense Forces.” What is interesting about these works—and the one spotlighted in this strategic note—is that to which specific Mexican states these groups are spreading and in what numbers appears to be somewhat in doubt. The Foreign Affairs article states that these groups have “ … formed in the Pacific states of Michoacán and Jalisco, in the northern border state of Chihuahua, in the eastern states of Veracruz and Tabasco, and on the outskirts of Mexico City. They now operate openly in 13 different states and at least 68 municipalities. According to the government, 14 new groups have formed since January; Mexican security analysts say the real number is likely much higher.” This earlier estimate represents two more states than that listed in the translated Mileno article from December. Still, compared to the Army War College paper that only lists 4 well organized vigilante groups (Fig 9., p. 43) in 2011, the popular uprising represented by the formation of these groups is significant.

What is not in doubt concerning the increasing spread of these groups throughout a sizeable portion of southern Mexico is the ‘legitimacy issue’ that they raise vis-à-vis the authority of the sovereign government. One of the primary functions of a nation-state is to protect its people from threats both foreign and domestic—be it from the ravages of war or rampant criminality. The Mexican nation-state has clearly failed in this regard and as a result hundreds of areas of impunity—under de facto gang and cartel control—have emerged within its territories. The emergence of the fuerzas autodefensas is a natural reaction to a Hobbesian reality forced upon the local citizenry—protect yourselves by bearing arms because the Federal government is either unwilling or unable to provide for your security and safety. To what extent these local defenses forces in Mexico multiply and evolve from this point forward is anyone’s guess. They may become criminal groups in their own right, merge with some of the pre-existing gangs and cartels, fall under the authority of the sovereign state (as agents of the state under Federal officers and advisors), or remain independent entities. Quite possibly, enough of these groups now exist to evolve down multiple pathways. Further, many analysts project more of these groups to emerge as the Federal government continues to lose its authority over additional sovereign territories. Given the past experiences Colombia has had with similar groups the future does not bode well for Mexico in this regard.

Addendum:  The original Spanish article states that civil self-defense groups are operational in 11 Mexican states but only depicts 10 in the map.