Mexican President Felipe Calderon formally inaugurated a military barracks in the violence-racked northeastern town of Ciudad Mier, where he reiterated that the deployment of army soldiers to battle drug-trafficking gangs is a necessary but temporary measure.

He said the new army base will allow time for authorities to recruit and form their own police forces in that town and other areas of Tamaulipas state, saying that the weakness, vulnerability and, in some cases, complicity, of law enforcement had put people “at the mercy of criminals.”

Calderon said Ciudad Mier, a colonial community in Tamaulipas state near the U.S.-Mexico border that was once known as the “Magic Town,” should be a tourist destination but instead was abandoned by its citizens last year because of the presence of criminal gangs.

In late 2010, nearly all of the town’s 6,300 inhabitants fled to neighboring municipalities and across the border into the United States due to fear of drug-related violence.

Many of them had relocated to a shelter in the nearby city of Ciudad Miguel Aleman.

Ciudad Mier, which is located in the “Frontera Chica” region of Tamaulipas, and many other towns in northeastern Mexico found themselves caught up in the war sparked by the March 2010 rupture of the alliance between the Gulf drug cartel and Los Zetas, the cartel’s former armed wing.

The shootouts between gunmen working for the rival cartels occurred for about six months and sometimes lasted as long as eight hours, leaving the streets covered with bullet casings.

In a bid to boost security, the Defense Secretariat ordered the construction of a “mobile” military barracks to house soldiers deployed to Ciudad Mier, a move Calderon said prompted the return of two thirds of the people who had fled the town.

“Ciudad Mier had started to become a community of empty squares, abandoned houses, of shuttered schools and businesses, of bullet-ridden walls. Faced with that situation, the government couldn’t remain with its arms crossed,” Calderon said.

The presence of the army soldiers, who arrived in the second half of 2011, “is gradually helping the people of Ciudad Mier and all of Tamaulipas regain the tranquility that had been snatched away from them by the criminals,” Calderon said.

He said homicides fell by more than 40 percent between the first and second halves of 2011, although he also acknowledged that “the road is long” and much work still remains.

The mobile military barracks, which the president formally inaugurated on Thursday, are capable of housing 600 troops.

The installations are the first of their type in the country, the Defense Secretariat said, noting that the materials used allow them to be taken down easily and moved to other areas as necessary.

The barracks, which occupy an area of 40 hectares (100 acres), respond to the need for mobile units capable of reacting to the contingencies that may arise in Tamaulipas state….

Analysis: This is a key new (and underappreciated) strategic component in the Mexican government’s response to the criminal insurgencies taking place in that country. The Mexican federal government is implementing a prototype program to reestablish its authority in the state of Tamaulipas, Mexico overrun by the cartels and gangs. Specifically, it is garrisoning an Army unit in a 100 acre modular base in close proximity to the abandoned town of Ciudad Mier. Ciudad Mier had been abandoned in late 2010, with most of its 6,300 residents becoming internally displaced persons (IDPs), due to the conflict raging between the Zetas and Gulf cartels. The establishment of the Army garrison (battalion size/600 soldiers) resulted in about two-thirds of the residents of Ciudad Mier returning back to the town.

The intent of the fortified town prototype in Ciudad Mier is to create an island of Federal authority and stability that can then be expanded to retake the surrounding lands that have been lost (what the Mexican government terms “areas of impunity”). This will be undertaken by the creation of new vetted (and uncorrupted) police forces that will then be established in nearby communities. It is assumed that the Ciudad Mier garrison will patrol the countryside in its area of responsibility (AOR) and function as a rapid deployment force that can then come to the aid of these new police forces when they are threatened by larger cartel commando units. No mention has been made of civilian defense forces (militias) being formed in support of the military garrison and police units— though such potentials exist and the creation of those units would have many benefits.

The fortified town strategy is being gradually expanded by the Calderon administration in selected regions of Mexico that have been lost to de facto cartel and gang political authority:

A second army base is being built in San Fernando, Tamaulipas, where 72 migrants, the majority of them from Central America, were massacred by Zetas in August 2010, and a third base is under construction in Ciudad Mante, another strife-torn part of the state [2].

The intent is to build supporting towns to Ciudad Mier that could be utilized to create their own zones of Federal control, mutually support each other, and, as a system of internal defenses, regain control of regions of Tamaulipas via their own battalion sized Army garrisons and subordinated police forces (See Fig. 1). 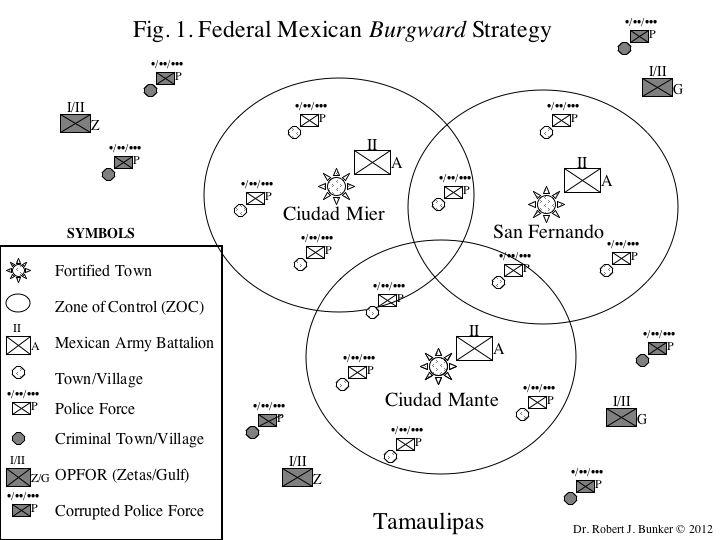 Of interest is how the fortified town strategy overlaps with Mexico’s growing internally displaced persons (IDPs) issue. This may become a primary Federal strategy to help mitigate it [3].  Also the establishment of such towns ties into very recent Feral cities analysis which discusses 4th (Purple) and 5th (Black) level cities (fully feral/dead cities and criminalized cities, respectively). This promotes the perspective that dead cities can be recolonized by the state and come back as 1st (Green) or 2nd (Yellow) level cites under its authority [4]. Finally, it is expected that the fortified town strategy will eventually be utilized in tandem by the Mexican federal government with some sort of retaking of the slums strategy in the major cities. Such a strategy was recently articulated by Vanda Felbab-Brown, though not specifically focused upon the criminal insurgencies taking place in Mexico [5].

Grand Strategic Analysis: In essence, fortified towns (garrison towns) are being established by means of recolonizing (and stabilizing existing populations) in a region of Mexico lost to the de facto rule of the criminal insurgents. This is pretty much an unheard of development with regard to mature, stable, and modern states. Rather, it is characteristic of centralized states expanding into frontier areas (those expanding territorially) and such states losing control over expanses of their lands (those being overrun by raiders and barbarians). This is very much reminiscent of Roman, and later Holy Roman, Empire frontier towns (burgwards et.al.) in Europe during the late imperial and post-Western empire eras. The raiders of those eras, however, were early on based on the Germanic tribes and Huns (Magyars) as opposed to today’s cartel (2nd/3rd phase) and gang (3GEN) groupings [6]. Modern parallels to US firebases in Vietnam may be made but the context and type of insurgency (criminal vs Maoist-inspired) make such contentions highly problematic. The historical parallels to the criminal-soldier threats of the late Roman Empire and Dark Ages appear even more viable in light of the multitude of atrocities committed (torture, mutilations, and beheadings), although in this instance with a post-modern contextual overlay.

Figure 1. Federal Mexican Burward Strategy is not to geographic scale. It is a notional figure of how this new strategy may be conceptualized. Military and police unit symbols will vary. While both Mexican Army and OPFOR units have motorized (& mechanized) capabilities the standard infantry symbol is being utilized for these groups.