Defense Secretary Mattis Arrives at Only U.S. Base in Africa

Defense Secretary Mattis Arrives at Only U.S. Base in Africa

DJIBOUTI - U.S. Defense Secretary Jim Mattis is in Djibouti, the tiny east African nation that’s home to the United States’ only military base on the continent. 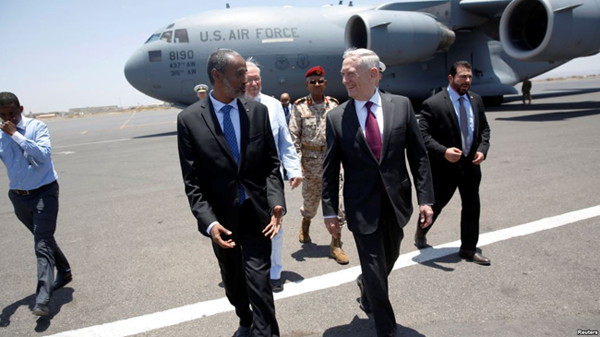 Mattis arrived Sunday at Camp Lemonnier before visiting the Djiboutian president and minister of defense.

Officials say Camp Lemonnier is one of the most strategically important areas for the United States military due to its geographic location. 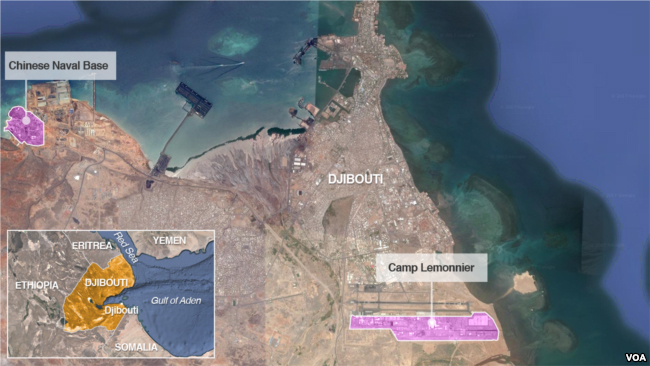 A Chinese naval base and U.S. base Camp Lemonnier, in Djibouti.

The base is critical for U.S. exercises and operations on the continent, and U.S. special forces use the facility to conduct counter-terror operations against al-Shabab in neighboring Somalia, according to officials.

Mattis’ visit to Djibouti comes less than a month after the White House approved a Pentagon proposal to allow the head of Africa Command to launch offensive attacks against al-Shabab militants in Somalia in support of partner forces.

The new directive clears the way for more U.S. presence on the ground and more leeway for U.S. strikes against the militant group. Before, the U.S. was targeting al-Shabab in what they called “self-defense” operations, which the military said protected U.S. advisers operating on the ground with Somali and African Union Mission in Somalia (AMISOM) forces.

Officials say the new mandate “hasn’t changed much” on the ground so far and is mainly representative of the president’s and the defense secretary’s desire to “empower” combatant commanders with “more flexibility.”

“It’s just that now Washington doesn’t have to approve every strike there,” one official said.

Camp Lemonnier is important for military operations in the Middle East as well, with the narrow Bab al-Mandeb strait the only separation between Djibouti and Yemen. Dozens of commercial and military ships travel through the strategic strip of water every day, and the deep Djiboutian port on the strait is used by the US Navy, the French navy and about 10 other navies, according to a U.S. official.

The U.S. will soon see another military neighbor in Djibouti when China completes construction of its first overseas military base.

General Thomas Waldhauser, the head of U.S. Africa Command, recently said it will be the closest facility that a “peer competitor” has ever had to a U.S. base, which he said raises some “security concerns.”

Another U.S. official told reporters the U.S. concerns include the “standard counter-intelligence kind” that come anytime you have forces operating within close proximity.

The official said that, at this point, the U.S. sees no reason why its forces cannot “comfortably coexist” with the Chinese in the area, adding that many of the concerns about the Chinese are similar to French feelings when the U.S. arrived in Djibouti.

Former U.S. Deputy Secretary of Defense Rudy DeLeon told VOA the Chinese base is a bid to increase Beijing's “heavy presence” in the Horn of Africa.

“It’s not traditional Western soft power, where it is a humanitarian mission, because China’s got a clear interest in the resources that are there,” DeLeon said.

While many of the people in the region are poor, the lands and coastal sea floors are rich with minerals, petroleum, gold and natural gas.

DeLeon said Chinese interest in developing some of the poorest areas in the region could be “constructive,” especially as the areas are battling a destructive drought.

Mattis is the first U.S. secretary of defense to visit to the base in Djibouti since Leon Panetta in 2005.