"Chain of Command" - DoD, National Geographic Team Up for Unrivaled DocuSeries on Fight Against Extremism

"Chain of Command" - DoD, National Geographic Team Up for Unrivaled DocuSeries on Fight Against Extremism 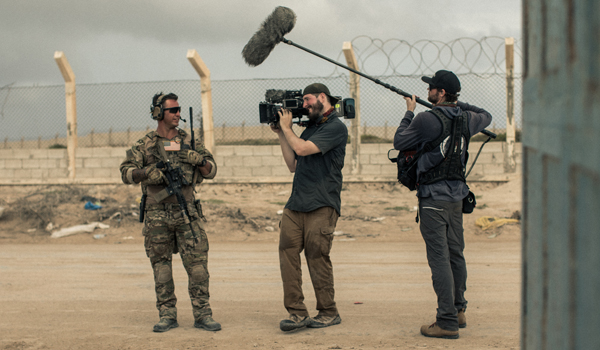 It’s hard to understand what our deployed men and women are doing to combat violent extremism. We hear about this fight daily in the news, but let’s face it – these are extremely complicated matters, and the American public often doesn’t have a full understanding of it.

That’s why the Defense Department partnered with National Geographic Channel on a new eight-part documentary series called “Chain of Command.” It offers unprecedented access to the men and women fighting extremism, including Marine Corps Gen. Joe Dunford, the chairman of the Joint Chiefs of Staff.

From the innermost sanctums of the Pentagon to the front lines across the globe, the new series is all about what daily life is like for our service members in the fight. It even gains access to the cockpit of a fighter jet on a mission, as well as a former jihad supporter who’s able to explain the mindset of an extremist.

I recently viewed the first episode and talked to show runner (aka, executive producer) Scott Boggins.

“There hasn’t been a documentary series ever done on this scope before,” Boggins said about the show, which was filmed in real time from the end of 2016, when the Battle for Mosul in Iraq was just beginning, to now. Filming is still going on and is expected to wrap up this month.

Through talking with Boggins, here are some of the things I’ve learned you can expect from the series:

There’s a Reason Why it’s Called “Chain of Command”

Viewers will see firsthand how decisions made at the Pentagon have a direct effect on service members on the ground who are fighting to protect the U.S. and its allies from violent extremists.

But it’s Really About the Human Element

“It’s about the men and women who are deployed and in the middle of a mission. That was our central focus,” Boggins said.

The goal: find a way for viewers to relate.

“Looking through their eyes, then you can maybe get a sense of understanding for the larger issues,” Boggins said.

That Includes Relationships With Coalition Partners

Take the fight to defeat ISIS in Mosul, for example. While the general public hears about the U.S. collaboration with Iraqi forces to defeat ISIS, it’s something we really can’t comprehend. During the first episode of “Chain of Command,” producers really focused on the teamwork and friendships that grew between Iraqi forces and U.S. troops.

“That was one of our biggest things: it wasn’t good enough just to say it. It was very important for us to show it,” Boggins said. “They’re … trying to help them help themselves and fight their own wars against this threat.

It Required LOTS of Time

Production crews really had to embed with the units on the ground to get them to lower their guard.

“It takes weeks and weeks and weeks of just being with them, because it takes a long time for people to just feel comfortable with the cameras … to let us in,” Boggins said.

The Pentagon helped producers get into some high, sensitive areas, too.

Boggins equated the massive production to putting together a puzzle.

“We’re following a story that is continually being written … and we’re doing it with characters around the world,” he said. “When we get to post-production and the edits, we try to piece it together for every full episode.”

You’ll Probably Recognize the Voice of the Narrator

Movie actor Chris Evans, who is the latest star to wear the Captain America uniform in that franchise and in “The Avengers” films, narrates the episodes.