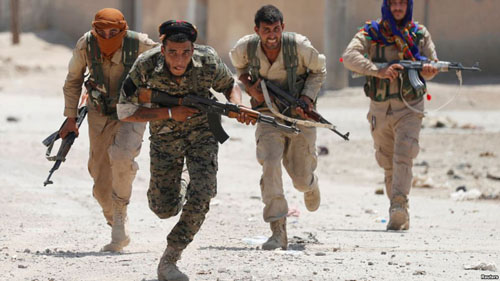 Kurdish fighters from the People's Protection Units (YPG) run across a street in Raqqa, Syria, July 3, 2017.

The battle to retake the Syrian city of Raqqa from the Islamic State terror group is a fight increasingly without front lines. The U.S.-backed, Kurdish-led Syrian Democratic Forces have breached the old city and control about a quarter of the terror group's de facto capital, say American officials, but holding what has already been seized is proving a struggle.

Disputes between the SDF and some Free Syrian Army militias who have started to participate in the battle isn't helping the advance, but the biggest obstacle remains the determined defense of IS fighters, who are using similar urban warfare tactics seen the past nine months in the terror group's fight to delay the retaking of Mosul by Iraqi security forces.

A month into the Raqqa assault, improvised explosive devices, sniper fire and the use of an elaborate network of tunnels to mount ambushes — as well as exploiting civilians as human shields— are all being deployed by the militants. IS militants have also been using drones to drop explosives on SDF militiamen.

A watchdog rights organization says in the assault's first month it has documented 650 deaths — 224 of them civilians.

According to the Syrian Observatory for Human Rights, a London-based group that relies on a network of activists for its reporting, 311 IS fighters, including a handful of commanders, and 106 fighters of the American-backed "Euphrates Wrath" forces have died so far.

"In addition, airstrikes left hundreds of civilians injured, with various degrees of severity, some of whom had their limbs amputated, some were left with permanent disabilities and some are still in a critical condition, which means that the death toll is still likely to rise," the observatory says.

Despite being only a tenth the size of Mosul, U.S. officials say they expect the house-to-house fighting to last several weeks. Estimates on how many militants remain in the city range from between 2,000 to 3,000. Most of them are thought to be from eastern Syria or foreign fighters drawn mainly from North Africa, the Middle East and Central Asia.

According to local activists some Raqqa-born IS fighters have defected and are providing intelligence to the SDF. Hassan Hassan, an analyst at the Tahrir Institute for Middle East Policy, a Washington-based think tank, and co-author of the book "ISIS: Inside the Army of Terror," says local fighters have proven less than committed in the battle.

"The Islamic State will likely have to rely on the city's still likely large population of foreign fighters as well as a new generation of young fighters brainwashed by the group's ideology who typically fight viciously to the end," Hassan argues in the current issue of CTC Sentinel, a publication of the West Point military academy.

Despite the participation of experienced, battle-hardened Kurdish fighters, private security advisers say the SDF doesn't have the same capabilities and training as the elite Iraqi units who have been confronting IS militants in Mosul since August. "They are spread much thinner," one European security adviser told VOA. "They are also not as well equipped and lack the armor the Iraqis have been able to use," he added. Keeping the advance going, and trying to pin the militants into smaller and smaller pockets, is proving grueling, he said.

Sunday, Iraqi Prime Minister Prime Minister Haider al-Abadi arrived in Mosul, Iraq's second largest city, to declare his security forces had wrested the wrecked city from the Islamic State, despite some continued fighting in at least one west Mosul neighborhood. Some U.S. officials are reckoning IS fighters may be able to hold out in Raqqa for up to three months.

In a bid to disrupt the SDF momentum, IS is now more regularly using suicide bombers driving reinforced vehicles packed with explosives — although not to the same degree as seen in the battle for Mosul. Last week, one suicide bomber managed to destroy a forward HQ used by the SDF.

Tens of thousands of refugees have fled, braving mines and savage IS sniper fire. Local activists estimate the number of civilians remaining in the city at about 60,000. They fault the international coalition for failing to have prepared for the handling of large numbers of displaced families. Civilians have been gathering in nearby camps lacking basic amenities such as healthcare, clean drinking water, and food," says the activist network Raqqa is Being Slaughtered Silently.

The group has accused the attacking forces of using a scorched-earth strategy, utilizing indiscriminate aerial bombardment in order to force militants to withdrew. U.S. officials admit there have been civilian deaths but say they are doing all they can to minimize casualties among non-combatants.